Julian Assange says that we must have political accountability–a general deterrence set to stop political organizations behaving in a corrupt manner. 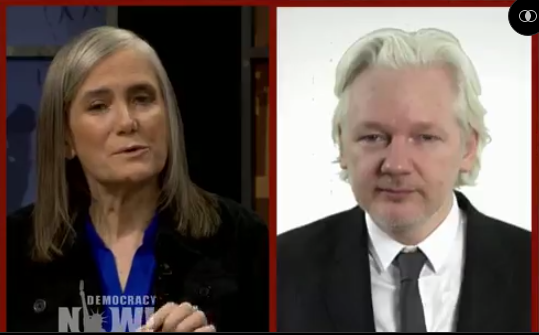 Julian Assange: Choosing Between Trump or Clinton is Like Picking Between Cholera or Gonorrhea

Following the end of the Republican National Convention, Donald Trump has received a surge in his popularity. He’s now leading Hillary Clinton 44 to 39 percent in a four-way match-up, according to the most recent CNN poll. Libertarian presidential candidate Gary Johnson received 9 percent, and Green Party candidate Dr. Jill Stein received 3 percent. But for WikiLeaks founder Julian Assange, the threat of a Donald Trump presidency doesn’t inspire him to back Hillary Clinton. When asked, Assange said: “You’re asking me, do I prefer cholera or gonorrhea?”

TRANSCRIPT
This is a rush transcript. Copy may not be in its final form.

AMY GOODMAN: Finally, Julian, we cut you off earlier when you were talking about what you felt were the most significant emails that you have released. Is there any last one that you’d like to mention? And also, do you have any thoughts on Donald Trump? I mean, just before we went to air, a CNN poll came out that says Donald Trump is ahead by 5 percentage points of Hillary Clinton. Now, he did just come off of the Republican convention, but many called it the worst convention in history, so it’s not automatic that he should have had this percentage lead. Of course, though, you have the crisis, the disarray, the Democratic Party is in because of these emails that you’ve released.

JULIAN ASSANGE: Well, you’re asking me, do I prefer cholera or gonorrhea? Personally, I would prefer neither. Look, I think—you know, we know how politics works in the United States. Whoever—whatever political party gets into government is going to merge with the bureaucracy pretty damn fast. It will be in a position where it has some levers in its hand. And so, as a result, corporate lobbyists will move in to help control those levers. So it doesn’t make much difference in the end. What does make a difference is political accountability, a general deterrence set to stop political organizations behaving in a corrupt manner. That can make a difference, because that changes the perception of what you can do or not do. And so, always—well, almost always, you should choose the principled position, which is to set a disciplinary signal about acting in a corrupt way, and take a philosophical position, which is our institutions can only be as good as our understanding of our institutions.

AMY GOODMAN: We want to—

JULIAN ASSANGE: Now, are you asking—the other—

JULIAN ASSANGE: The other top emails, well, as I said, I think this instruction by Luis Miranda, the head of communications, to go out and covertly spread anti-Bernie Sanders propaganda is a clear instruction combined with a chain of command. It’s not simply expressing a sentiment. It is expressing an instruction within the DNC to subvert the Bernie Sanders campaign.

Then there’s a lot of emails about the close relationship between the DNC and the media—The Washington Post involved in a co-fundraising party, an off-list co-fundraising for the DNC, calling up MSNBC during the middle of a program and saying, “Pull that segment now,” Debbie Wasserman Schultz calling up the president of MSNBC in order to discipline Morning Joe, etc. That’s, you know, of course, something that we’ve all suspected happens, but this is concrete proof of it.

But, you know, I really encourage people to research the more than 8,000 attachments that we put out, separate files, including more than 175 spreadsheets. That has the real core, the financial core, of the power structure and the exercise of monetary influence over the DNC. And that’s something that’s going to seed journalistic investigations for years.

AMY GOODMAN: Julian Assange, we want to thank you for being with us. Julian Assange, founder and editor-in-chief of WikiLeaks. This is Democracy Now! You can go online at democracynow.org to read the transcript or to hear again either the audio podcast or the video, see the video of this interview. We’re broadcasting from the Democratic convention in Philadelphia. It’s the first day. It will be gaveled in in just a couple of hours from this broadcast. I’m Amy Goodman, with Juan González. When we come back, a debate. Stay with us.

William Brighenti is a Certified Public Accountant, Certified QuickBooks ProAdvisor, and Certified Business Valuation Analyst. Bill began his career in public accounting in 1979. Since then he has worked at various public accounting firms throughout Connecticut. Bill received a Master of Science in Professional Accounting degree from the University of Hartford, after attending the University of Connecticut and Central Connecticut State University for his Bachelor of Arts and Master of Arts degrees. He subsequently attended Purdue University for doctoral studies in Accounting and Quantitative Methods in Business. Bill has instructed graduate and undergraduate courses in Accounting, Auditing, and other subjects at the University of Hartford, Central Connecticut State University, Hartford State Technical College, and Purdue University. He also taught GMAT and CPA Exam Review Classes at the Stanley H. Kaplan Educational Center and at Person-Wolinsky, and is certified to teach trade-related subjects at Connecticut Vocational Technical Schools. His articles on tax and accounting have been published in several professional journals throughout the country as well as on several accounting websites. William was born and raised in New Britain, Connecticut, and served on the City's Board of Finance and Taxation as well as its City Plan Commission. In addition to the blog, Accounting and Taxes Simplified, Bill writes a blog, "The Barefoot Accountant", for the Accounting Web, a Sift Media publication.
View all posts by William Brighenti →
This entry was posted in Accountants CPA Hartford, Articles and tagged Amy Goodman, anti-Bernie Sanders propaganda, Debbie Wasserman-Schultz, Democracy Now, DNC emails, Julian Assange, Julian Assange says that we must have political accountability--a general deterrence set to stop political organizations behaving in a corrupt manner., Julian Assange: Choosing Between Trump or Clinton is Like Picking Between Cholera or Gonorrhea, Luis Miranda, Morning Joe, MSNBC, Washington Post, WikiLeaks. Bookmark the permalink.