Bernie Sanders on fight against ISIS: “We have got to learn the lessons from Iraq”

Posted on December 6, 2015 by William Brighenti 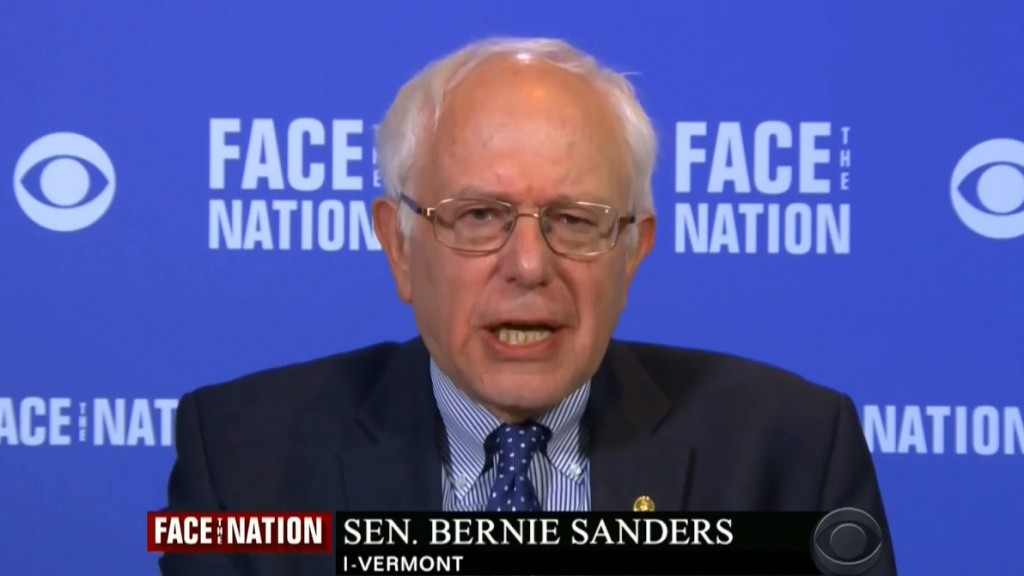 DICKERSON: We’re back now with Senator Bernie Sanders, who is in Burlington, Vermont, this morning.

Senator Sanders, the president is going to address the nation tonight. If you were president, what would you say?

SEN. BERNIE SANDERS (I-VT), DEMOCRATIC PRESIDENTIAL CANDIDATE: What I would say is that we have got to be as aggressive as we can in destroying ISIS, but we have to learn the lessons of the past.

And I believe very strongly that we need to put that coalition together. We need to put it together as soon as possible. But I do believe we have got to learn the lessons from Iraq.

I hear a lot of tough talk coming from my Republican opponents out there. They are really tough guys. But I heard that back in 2002 from George W. Bush. He was wrong. The invasion of Iraq was one of the worst foreign policy blunders in the history of this country and in many ways precipitated exactly where we are today.

So, yes, we have got to be tough, but we have got to be smart. And that means an international coalition with Muslim troops on the ground supported by Western democracies with airpower and other military efforts.

But the troops on the ground to crush ISIS have got to be led by the Muslim nations.

What is your feeling — what would you message be about America and the threat in the homeland security sphere of this conversation?

SANDERS: Well, obviously, we have got to do everything that we can to protect the American people. That’s a no-brainer.

And that means much tougher screening policies than we have right now. I think Secretary of Homeland Security Johnson is right. We should have more agents placed in other countries around the world. And it’s not just Muslim countries that we have to worry about. There are other countries as well that people can slip in to this country.

Second of all, I think we need to do much, much better work, not only in our intelligence efforts, but in coordinating international intelligence. I think, clearly, Paris was an intelligence failure. And we need to be tapping the intelligence information that is being ascertained from countries all over the world.

DICKERSON: Democrats are going to notice that you didn’t list gun control in your responses. A lot of Democrats, including the president, who will address it tonight, think gun control is an answer to this.

SANDERS: No, I — well, I was just at a press conference the other day talking about the need for gun — increased gun control.

I don’t think anybody believes it’s a magic formula. Clearly, though, there is an obvious commonsense consensus, John, in this country that guns should not be falling into the hands of people who should not be having them.

I believe we have got to do away with this gun show loophole. About 40 percent of the guns in this country are sold outside of the purview of the instant background check process. I think we need — I agree with “The New York Times.” I think it does not make sense to me that we have guns designed for military purposes that can kill enormous numbers of people in a very short period of time being sold and distributed in the United States.

And I support a ban on assault weapons. I think we need to do away with the straw man provision so that people can legally buy guns, but then give them to criminals.

And I think we need a revolution in mental health. And that revolution is about making sure that the many thousands of people who are walking the streets of America today who are suicidal or homicidal get the help they need, and they get it now, not two months from now.

Senator Sanders, we need to take a break right now, but we’re going to ask you to stay with us.

And we will be back with Senator Sanders in a moment.

We will be right back.

DICKERSON: Some of our CBS stations are leaving us now, but, for most of you, we will be right back with a lot more FACE THE NATION, including more with Senator Bernie Sanders and our political panel.

DICKERSON: Welcome back to FACE THE NATION. I’m John Dickerson.

Senator Sanders, I want to continue on with the conversation a little bit with — of on gun control. So many Democratic voters I’ve talked to in the wake of the San Bernardino shootings are concerned about this. One of the questions they wanted to ask — wanted me to ask you is whether you regret having voted to protect gun manufacturers, giving them that immunity. What’s your feeling on that now?

SANDERS: Well, I come from a rural state that has no gun control at all. I think the votes that I have cast over the last 25 years have been strong votes for protecting the American people from gun violence. That one particular vote, there were thing in it that make sense to me. There are things in it that do not make sense to me and I’ve said many times, I’m willing to rethink that piece of legislation and make it more effective. If a gun manufacturer understands and knows that the product that he is selling to a community is really getting out to criminal elements, that gun manufacturer should be held liable for what the company is doing.

DICKERSON: In retrospect, though, do you think it was a mistake, that vote?

SANDERS: There were elements in that vote back then that did make sense. In the sense that if a small gun shop owner in the state of Vermont sells a product, a gun, legally to somebody else who then goes out does something crazy, do I think that that small gun shop owner should be held liable for legally selling the product, no, I don’t. But I think, bottom line is, that we should be rethinking that legislation and we should be doing everything that we can as a country to make sure that weapons do not get into the hands of people who should not have them.

DICKERSON: Because of your experience from a rural state and your understanding of that, you’ve talked about being a bridge builder between the Democrats, who would like to see gun control and Second Amendment, those who care about the Second Amendment. So tell me how you would build that bridge in this instance, because when I talked to some conservatives they say, look, this is a situation in which a man went and killed his co-workers and a mother dropped of her six month old baby. You’re not going to stop those kind of premeditated killers with any gun control.

SANDERS: Well, let me answer it in two ways. For a start, there is a split, a political split on this country on guns, and everybody knows that. Every poll indicates that. But I think, John, there is a broad consensus of focusing on the reality that the vast majority of the American people, not everybody, by the way, but the vast majority understand that we have got to do everything that we can to prevent guns from falling into the hands of people who should not have them.

Second of all, if you believe that, which most Americans believe, but most Americans also believe is you don’t want an obvious loophole that allows guns to be sold to people who are criminals or mentally ill. That means shut — ending the gun show loophole.

DICKERSON: I don’t want to leave without —

SANDERS: And I think there is a consensus, John. Yes.

DICKERSON: Let’s talk about climate change. I know that was an important issue for Democrats this week. You got a new plan coming out. It has a carbon tax as a part of it. Might that not scare people who think they’re —

DICKERSON: Tell me about that.

SANDERS: All right. Well, John, I mean this is not a plan for Democrats. Pope Francis recently said something, which I think is profound, and he’s right, as he often is. And what he said is, this planet is on a suicidal direction in terms of climate change. And it is beyond my comprehension that we can have a Republican Party and Republican candidates who are more concerned about getting huge campaign contributions from the Koch brothers and Exxon Mobil and the coal industry than they are about accepting what the overwhelming majority of scientists are saying. And that is, climate change is real, caused by human activity and already causing major and devastating problems in our country and around the world.

And what the scientists are telling us — we are — telling us is, if we do not act boldly and aggressively now, which is what my legislation does, massive cuts in carbon pollution, if we don’t do it now, the planet that we are going to be leaving to our children and grandchildren may very well be uninhabitable and in much worse shape than the planet is today. We have a moral obligation to move aggressively to transform our energies —

SANDERS: Away from fossil fuel to energy efficiency and sustainable energy and that is what my legislation does.

SANDERS: So if you want to talk about being frightened, I am frightened about the planet we’re going to leave our kids if we don’t act.

DICKERSON: All right, Senator Bernie Sanders, we’re going to have to leave it there. Thank you so much for being with us.

William Brighenti is a Certified Public Accountant, Certified QuickBooks ProAdvisor, and Certified Business Valuation Analyst. Bill began his career in public accounting in 1979. Since then he has worked at various public accounting firms throughout Connecticut. Bill received a Master of Science in Professional Accounting degree from the University of Hartford, after attending the University of Connecticut and Central Connecticut State University for his Bachelor of Arts and Master of Arts degrees. He subsequently attended Purdue University for doctoral studies in Accounting and Quantitative Methods in Business. Bill has instructed graduate and undergraduate courses in Accounting, Auditing, and other subjects at the University of Hartford, Central Connecticut State University, Hartford State Technical College, and Purdue University. He also taught GMAT and CPA Exam Review Classes at the Stanley H. Kaplan Educational Center and at Person-Wolinsky, and is certified to teach trade-related subjects at Connecticut Vocational Technical Schools. His articles on tax and accounting have been published in several professional journals throughout the country as well as on several accounting websites. William was born and raised in New Britain, Connecticut, and served on the City's Board of Finance and Taxation as well as its City Plan Commission. In addition to the blog, Accounting and Taxes Simplified, Bill writes a blog, "The Barefoot Accountant", for the Accounting Web, a Sift Media publication.
View all posts by William Brighenti →
This entry was posted in Accountants CPA Hartford, Articles and tagged believes there must be an international coalition led by Arab nations in the fight against ISIS., Bernie Sanders on fight against ISIS: “We have got to learn the lessons from Iraq”, December 6 2015, Dickerson, Face the Nation, I-Vermont, interview, Senator Bernie Sanders, transcript, video. Bookmark the permalink.