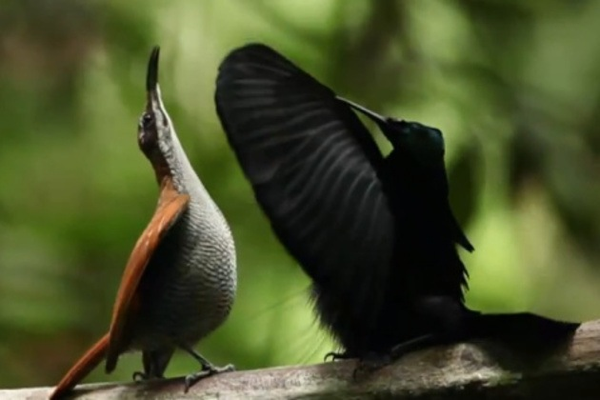 Have you ever observed the mating dance of the birds of paradise? The male moves dramatically, and in response, the female inches away, but ultimately the male conquers the female, and achieves the purpose of this ritualistic, instinctive dance.

Well, the Democrats and Republicans have been dancing ritualistically quite some time now like birds of paradise. The Republican Congress leaps dramatically to the right, and then the Democratic President and Congress inches to the right, and as a result, the fulcrum of the political balance between the two parties and the constituents that they represent, keeps moving ever so slightly and undetectably to the electorate to the right.

So especially over the past 30 years, the Democratic Party has been moving dramatically to the right on economic issues, and camouflaging its collusion with Wall Street and Corporate America big money by hiding behind wedge issues—such as abortion, gay marriage, immigration, etc.—which are not financial and thus not any detriment or threat to the financial interests of Wall Street.

The elections of Bill Clinton as President in 1992 and 1996, and those of Barack Obama in 2008 and 2012, proved the political viability of this schizophrenic approach of the Democratic Party of remaining liberal on social issues but selling out to Wall Street on financial issues.

So it is not surprising at all that Bernie Sanders is now being characterized as this “socialist” from out in far-left field.  But, in truth, Bernie Sanders has not changed politically over the past 45 years; rather, the Democratic Party has been doing this hokey-pokey dance with Republicans for all these 45 years in order to woo the votes of working class Americans while continue to cash in on its share of the loot from Corporate America and Wall Street.

Do you remember that hokey-pokey dance that you would do at weddings as a child?  That’s what Democrats have been doing with Republicans.

Don’t believe me? Recall that Obama had talked about a single-payer healthcare bill in 2008. Recall that he failed to present this bill to Congress for a vote. Instead in response to the Republican cries of socialism, pink commie, and the like, he then inched over and presented the Romneycare version of fixing healthcare, the original Republican solution to our nation’s healthcare problem of the mid-1990s. Of course, now that the Republicans have leaped to the extreme right (the political right raised to the nth power of infinity), they have not truly proposed any viable solution at all to the prohibitive cost of healthcare except for holistically medically dumping the sick and old on a hill outside Sparta and letting nature take its course.

Still don’t believe me? Recall that Obama in 2008 originally proposed tax increases for those earning more than $250,000 annually, and tax cuts for those earning less. And how did the Republicans dance to that tune? In 2010 they counter-proposed tax cuts plus a huge estate tax cut largely benefiting the rich. See? President Obama put his left foot out and his left foot in, he put his right foot out, then shook it all about…hokey-pokeying the middle class and turning himself around, and that’s what it’s all about.

The problem with doing this dance of the hokey-pokey birds of paradise is someone gets screwed at the end of this dance, and guess who does? Always, inevitably, the middle class: no single-payer healthcare system to control costs, making the insurance, pharmaceuticals, and medical companies even richer; tax cuts for the rich, resulting in huge deficits, which are hidden, deferred taxes, later to be passed onto the middle class in customary subterfuge fashion; and ultimately the privatization of medicare and, doomed to follow, social security, eventually abandoning us all on that same Spartan hill after we become old and sick.

It’s too bad President Barack Obama and former President Bill Clinton never appeared on “Dancing with the Stars” because they do this dance oh so well, and would be shoo-ins to win that contest hands down with their hokey-pokey, birds of paradise dance. They are so good at it that I bet you didn’t even notice it, did you?

But do not fret:  Hillary Clinton will win the night on “Dancing with the Stars” and the American Presidency doing  the hokey-pokey dance of putting her left foot forward on the social issues of gay marriage, immigration, and feminism, but taking her left foot back on the economic issues of the Trans-Pacific Partnership (TPP), Keystone XL Pipeline, and income and wealth inequality.  So Wall Street and Corporate America has its winning dance partner in Hillary Clinton.  Do you think she knows how to do the hustle?

Bernie Sanders, on the other hand, never even learned to hustle.  Consequently, is it any surprise that he is being characterized as the guy who is not with it and who is out in far left field?  Look at what this so-called “socialist” has been saying:

This is communism?!  This is socialism?!  Is there any mention of the State owning your property and your house?  Of course, Wall Street owning your house with all of your debt, and owning your children with all of their student debt is perfectly acceptable:  it is capitalism at its finest hour since the rich get richer and you continue to get screwed.  Or is it a corporate totalitarian state reigned by oligarchs and monarchs?

Does the State dictate prices and wages?  Or does Corporate America, by shipping all jobs to China and Vietnam, where the average hourly wage is $0.56 per hour?

Isn’t all of what Bernie Sanders has been saying is a call for equity and justice for all rather than merely the super rich, the 1%, the American aristocracy?  His twelve steps forward remind me of those once highly regarded American ideals and proposals of our most popular President of all time—Franklin Delano Roosevelt—who endorsed them over 80 years ago!

Yes, Old Uncle Bernie Sanders may indeed be an anachronism from the 1960s and the 1930s.  But he hasn’t moved to the far left; he has merely remained where he was in the late 1960s.  The country, through corporate ownership of our elected officials and of the media, has shifted way to the right.

And we, the American people, have been hustled to this far right by the birds of paradise mating dances of both the Democratic and Republican parties.  We just didn’t notice, however, that we were being hokey-pokeyed by these political parties.  Why?  Because its execution was, and is, kabuki theater at its finest!

William Brighenti is a Certified Public Accountant, Certified QuickBooks ProAdvisor, and Certified Business Valuation Analyst. Bill began his career in public accounting in 1979. Since then he has worked at various public accounting firms throughout Connecticut. Bill received a Master of Science in Professional Accounting degree from the University of Hartford, after attending the University of Connecticut and Central Connecticut State University for his Bachelor of Arts and Master of Arts degrees. He subsequently attended Purdue University for doctoral studies in Accounting and Quantitative Methods in Business. Bill has instructed graduate and undergraduate courses in Accounting, Auditing, and other subjects at the University of Hartford, Central Connecticut State University, Hartford State Technical College, and Purdue University. He also taught GMAT and CPA Exam Review Classes at the Stanley H. Kaplan Educational Center and at Person-Wolinsky, and is certified to teach trade-related subjects at Connecticut Vocational Technical Schools. His articles on tax and accounting have been published in several professional journals throughout the country as well as on several accounting websites. William was born and raised in New Britain, Connecticut, and served on the City's Board of Finance and Taxation as well as its City Plan Commission. In addition to the blog, Accounting and Taxes Simplified, Bill writes a blog, "The Barefoot Accountant", for the Accounting Web, a Sift Media publication.
View all posts by William Brighenti →
This entry was posted in Accountants CPA Hartford, Articles and tagged Barack Obama, Bernie Sanders, Bill Clinton, birds of paradise, Corporate money, dancing with the stars, Democratic Leadership Council, Democratic Party, DLC, Hillary Clinton, hokey pokey, income inequality, Is Bernie Sanders out in far-left field or are both political parties out in far-right field, kabuki theater, Keystone XL Pipeline, mating dance of birds of paradise, populism, Republican party, Richard Nixon, Ronald Reagan, the hustle, Trans-Pacific Partnership (TPP), Wall Street, wealth inequality. Bookmark the permalink.