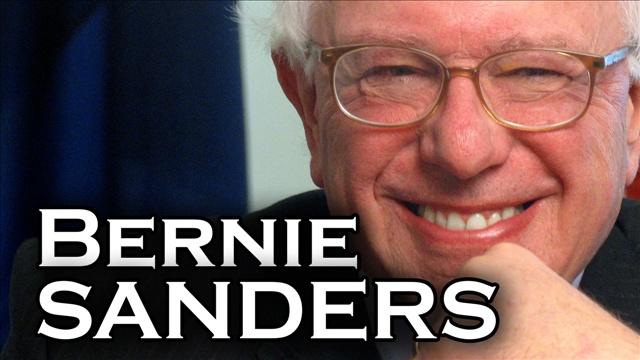 Bernie is getting a little bit of exposure.  He’s done rounds on the Sunday shows; he’s gone on Tom Hartmann’s Show; Ed Shultz’s Show; but aside from that, they [the corporate-owned media] are really trying to exclude him from the actual conversation when they have these conversations about presidential candidates at this point because the Democratic Party as a whole, which is mostly run by the Corporate Democrats, have already decided that they are going to anoint Hillary Clinton.

But when Bernie Sanders came out and raised $3 million in his first four days, most of that from individual contributions of less than $250, that’s when people started paying attention and realizing this guy has a real shot; that he is not just this crazy grandpa type who comes out and says these things, with which everyone agrees, but knows that he doesn’t have a chance.  However, that $3 million that Bernie raised over a few days is a game changer:  it demonstrated that he indeed has the potential to raise money—although not from corporations—and be a serious player!

One of the things that a lot of people like to say is, “well the best thing that we can hope for is that he will bring the populist message to the conversation and force Hillary to go a little bit further to the left.”  And we’ve have been seeing recently that Hillary Clinton is trying to co-op that populist message.

But here’s the thing:  we’ve had two election cycles where we had a Democratic candidate talk like a populist and convince us that he was going to go in there and raise taxes on millionaires and billionaires to help pay the deficit, to rebuild the infrastructure, to propose a single-payer healthcare plan, and change the way Washington operates, but then propose, endorse, or approve a corporate agenda instead of his promised populist agenda, like the following:

Remember?  Hint:  his name begins with an O and ends in an A.

So those corporate political strategists who feel that all Hillary needs to do is merely tinker and change her message, as Obama did, to dupe voters into supporting her are really just kidding themselves.  Hillary is who she is, and she doesn’t make any apologies for it.  So now Hillary trying to say one thing and doing another won’t work this time.  Why?

Because now we can compare the records of the two:  Bernie Sanders has over twenty years of voting records that we can look at and see that when he says something about fighting for the middle class, he has a voting record to back it up.  But Hillary does not!  And that makes all the difference this time.

The problem with the Democratic Party is that the DCCC, the Democratic Congressional Campaign Committee, has done everything it can to hold back the progressive message, and has only grudgingly allowed any of the progressive messages to go forward.  But now it has witnessed Bernie Sanders campaign raise over its first few days in the race $3 million dollars in total from 75,000 supporters, each giving on average $43.  And this kind of grass-roots political support when Bernie Sanders is not even on the political radar map for most Democrats and Americans!

Consequently, it becomes important for social media and for the very few people left in the progressive corporate media, like Ed Schultz for example, to get the message out there that Bernie Sanders is not a guy that we want out there only to gel up the progressive message, but, rather, that this is a guy who can win the Democratic primary and the general Presidential election.

Bernie Sanders is not hiding anything. He has not been wishy washy on things, like others (whom will not be mentioned):  “oh, I don’t know where I stand on TPP:  I’m for it today; I’m against it tomorrow.”  Or with the Keystone XL Pipeline:  “no, it’s good; no, it’s bad.”  He has not been wishy washy; he has not flip-flopped; he does not change his opinion based on the attitude of the day.  What he says, he means.  He is authentic and credible.

Until this battle is fought and won, it’s fine with me that the Democratic Party splits and I hope that Bernie Sanders is the person that does this.

[The above posting is a very loose rendition—with liberal annotations by the Barefoot Accountant of Accountants CPA Hartford Connecticut LLC—of a conversation between Mike Papantonio and Farron Cousins on Ring of Fire Radio, published on youtube.com on May 21, 2015.]