Bernie Sanders asks what is Hillary Clinton campaigning on 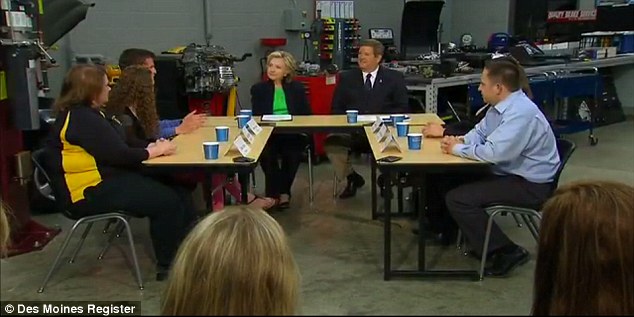 Thomas Roberts: The press box is all waiting and highly anticipating what Hillary Clinton is going to be talking about with these young students.

Bernie Sanders: Thomas, I am sure that there is great national interest about the Scooby Van. I can’t think of an interest, an issue, of more significance to the American people. But I think also the American people want Secretary Clinton and all candidates to talk about why the middle class continues to decline while the rich get richer, why Wall Street continues to have unbelievably power over the American economy, what her position is on the Trans-Pacific Partnership, what her position is on Keystone, what she is going to do in terms of the huge tax breaks corporate America receives. And I would hope very much that serious debate on serious issues is what we do in any campaign.

…What is serious is that at a time when major candidates will be spending well over a billion dollars because of Citizens United, if I run, I want to run a serious campaign. And I want to make sure that we have the financial resources to do it. I am not going to raise a billion dollars. My support comes from small individual contributors, not millionaires and not billionaires. So that’s what we are trying to ascertain. … it depends upon the grassroots support there is to take on the big money interest and whether or not we can raise the kind of money we need to run a winning and serious campaign.

The American people not only want a serious debate on this campaign, they want candidates who will deal with the most important issue, and that is are we prepared to take on the billionaire class which has so much power over our economic and political life.

Thomas Roberts: Do you not believe that Hillary Clinton is out for the little guy, that she wants to be the champion that she said wanted to be in her facebook announcement?

Bernie Sanders: Well, why don’t you tell me what Hillary Clinton is campaigning on. Do you know? You don’t know and I don’t know, and the American people don’t know, so it’s premature. I do know what the issues are and what we have to do. I can’t comment on Secretary Clinton until we know what she is saying.

William Brighenti is a Certified Public Accountant, Certified QuickBooks ProAdvisor, and Certified Business Valuation Analyst. Bill began his career in public accounting in 1979. Since then he has worked at various public accounting firms throughout Connecticut. Bill received a Master of Science in Professional Accounting degree from the University of Hartford, after attending the University of Connecticut and Central Connecticut State University for his Bachelor of Arts and Master of Arts degrees. He subsequently attended Purdue University for doctoral studies in Accounting and Quantitative Methods in Business. Bill has instructed graduate and undergraduate courses in Accounting, Auditing, and other subjects at the University of Hartford, Central Connecticut State University, Hartford State Technical College, and Purdue University. He also taught GMAT and CPA Exam Review Classes at the Stanley H. Kaplan Educational Center and at Person-Wolinsky, and is certified to teach trade-related subjects at Connecticut Vocational Technical Schools. His articles on tax and accounting have been published in several professional journals throughout the country as well as on several accounting websites. William was born and raised in New Britain, Connecticut, and served on the City's Board of Finance and Taxation as well as its City Plan Commission. In addition to the blog, Accounting and Taxes Simplified, Bill writes a blog, "The Barefoot Accountant", for the Accounting Web, a Sift Media publication.
View all posts by William Brighenti →
This entry was posted in Accountants CPA Hartford, Articles and tagged 2016 Democratic Primary, Berlin Sanders asks what is Hillary Clinton campaigning on, Bernie Sanders, Bernie Sanders asks what is Hillary Clinton campaigning on, Hillary Clinton, MSNBC, transcript, video. Bookmark the permalink.