Attorney General Eric Holder: the Slow and the Listless

Posted on July 11, 2012 by William Brighenti
Get the Flash Player to see this content.

Cenk Uygur: We’re back with the aggressive progressive. As you know, on June twenty ninth the Republicans held Eric Holder, our Attorney General, in contempt. Here’s how it went down.

Diane Sawyer: The House of Representatives approved a resolution holding Attorney General Eric Holder in criminal contempt of Congress for refusing to disclose documents on that botched undercover program, the “fast and furious” operation. No sitting cabinet member has ever been held in contempt. Dozens of Democrats boycotted the vote. They walked out of the chamber. 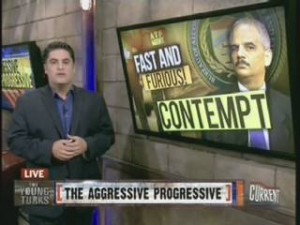 Cenk Uygur: Well, that program was the “fast and furious” that they think he should turn over more information on.

But to me the real problem with Eric Holder is not “fast and furious.” In fact we’ve shown on this program that that is nonsense, that the ATF had no program to shuffle guns to intermediaries that then took them to Mexican cartels. 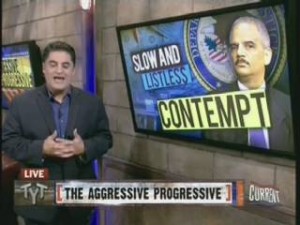 I think the real problem with Eric Holder is what I would call “the slow and the listless”. And that is his treatment of fraud in the banks. We had a gigantic amount of fraud in two thousand and eight (2008). What did he do about it? Nothing.

We have the LIBOR scandal now involving twelve different banks. What has he done so far? Nothing. In fact, did you know his former law firm, Covington and Burling, deviced a shell corporation implicated in some of the biggest mortgage and foreclosure fraud? Could that be part of the reason he has not done anything?

How many prosecutions has Eric Holder done of big bank executives? 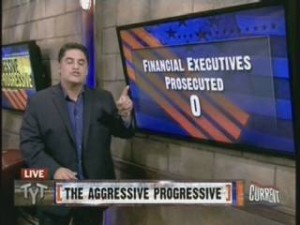 None! Zero! “The slow and the listless.”

That’s what I hold him in contempt for. 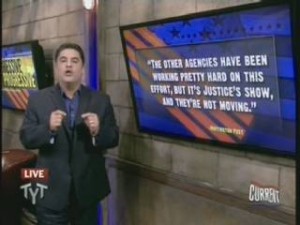 William Brighenti is a Certified Public Accountant, Certified QuickBooks ProAdvisor, and Certified Business Valuation Analyst. Bill began his career in public accounting in 1979. Since then he has worked at various public accounting firms throughout Connecticut. Bill received a Master of Science in Professional Accounting degree from the University of Hartford, after attending the University of Connecticut and Central Connecticut State University for his Bachelor of Arts and Master of Arts degrees. He subsequently attended Purdue University for doctoral studies in Accounting and Quantitative Methods in Business. Bill has instructed graduate and undergraduate courses in Accounting, Auditing, and other subjects at the University of Hartford, Central Connecticut State University, Hartford State Technical College, and Purdue University. He also taught GMAT and CPA Exam Review Classes at the Stanley H. Kaplan Educational Center and at Person-Wolinsky, and is certified to teach trade-related subjects at Connecticut Vocational Technical Schools. His articles on tax and accounting have been published in several professional journals throughout the country as well as on several accounting websites. William was born and raised in New Britain, Connecticut, and served on the City's Board of Finance and Taxation as well as its City Plan Commission. In addition to the blog, Accounting and Taxes Simplified, Bill writes a blog, "The Barefoot Accountant", for the Accounting Web, a Sift Media publication.
View all posts by William Brighenti →
This entry was posted in Accountants CPA Hartford, Articles and tagged Aggressive progressive, ATF, Attorney General Eric Holder, Cenk Uygur, contempt of Congress, Covington and Burling, Current TV, Diane Sawyer, fraud, House of Representatives, Huffington Post, June 29 2012, Justice Department, law firm, Mexican cartels, mortgage and foreclosure bank fraud, mortgage task force, no prosecutions of big bank executives, Richard Eskow, the fast and the furious, the slow and the listless, The Young Turks, transcript, video. Bookmark the permalink.