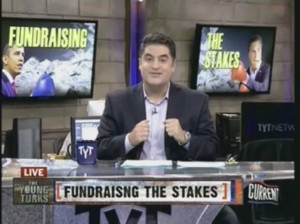 Cenk Uygur: The rest of the media reports the fundraising per month without noting that this is basically legalized bribery. And they make it seem like, hey, you know what? This is a contest. And we are going to see who wins this contest. And this month Mitt Romney won.

So the rest of the media declares that Mitt Romney has won. But what has he won in the month of June? 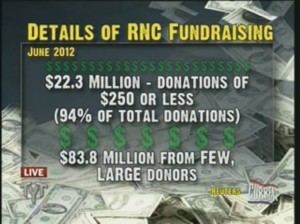 He’s won the contest for who can get bribed more efficiently and more thoroughly. I don’t think that is something to celebrate. I think that shows you how broken our system is. 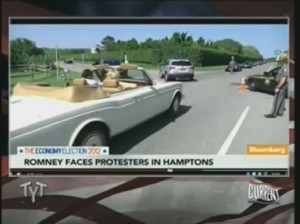 And speaking of which, Mitt Romney was in the Hamptons over the weekend. He went to three different fundraisers, including one at David Koch’s house, one at Ron Perlman’s house. And they were on average fifty thousand dollars ($50,000) per plate. The Koch one was more expensive: you got suckered if you went to that one and paid seventy five thousand dollars ($75,000). You would have had the same access as the other ones which were cheaper. And he raised is about three million dollars in one day. 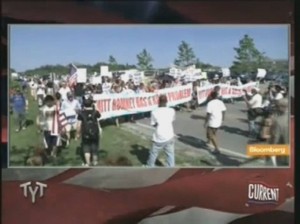 Now as all these people were pouring in, in their Ferraris, literally, Range Rovers, golden Mercedes—as was described in one of the articles—at these fundraisers, they also sometimes talk to the press and told us what they think of all the, you know, the money going into the system, they’re in favor of it, etc.

There were also protesters, too. So first let’s show you the protesters. 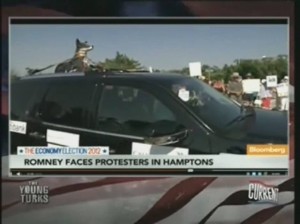 [Beginning of video] “…Protesters in the process….Romney, his secret service detail, could be seen criss-crossing the Hamptons in their fleet of suburbans, donors lined up to gain access to these closed events. They were met by protesters at several of these events. Many of whom had been bused in from New York City. Some said they were part of the Occupy Wall Street movement.” [End of video] 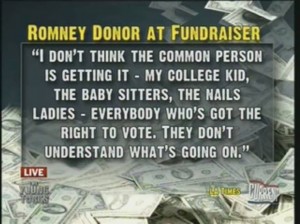 All right, I love the fake dog on the roof to make fun of them. But honestly they couldn’t get anywhere near the events. A couple of people were arrested trying to get onto the beach where the yachts had docked to go to some of these events. I am not kidding. Okay.

So now here’s one of the anonymous donors talking to the L.A. Times, she said: 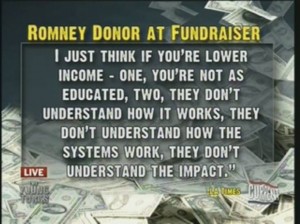 Look at that disdain dripping from her mouth: “Oh, you lower class people. You obviously don’t know the same things we know. And if you knew it, you would understand why we have to bribe Mitt Rodney for our advantage. Oops, did I say our advantage? I meant your advantage. Come on nails ladies, figure it out already. I know you have a low education but you have to understand us rich people in the Hamptons have to rule this country.”

They should be sickening to all of us. One of the ladies bragged to one of the reporters, “hey do you know how generous we are?” And she said, “look, my husband, who by the way had supported Obama the last time around and he said, “oh, he bit the hand that fed him”; in other words, “How dare you not be as good to the rich as Mitt Romney. We paid for something and we wanted a return on that investment. And so they flip over to Mitt Romney and she goes to tell a reporter, “oh, tell him who’s staying on our yacht.” And I thought, what, are they going to say that they got, you know, big brother big sister program there, helping people on their yacht. No, she was bragging that there was an incredibly rich Hollywood executive from Miramax who couldn’t get a hotel in the Hamptons as they were all trying to bribe Mitt Romney, and they let him stay on the yacht with them.

But that’s not being generous. That’s incredibly rich people staying on a yacht and buying our democracy. Oh, come on, man, this is grotesque, and the band plays on as if there’s nothing wrong in our government. They are buying our government as we watch.

Alright, listen, this is obviously an epic problem.

William Brighenti is a Certified Public Accountant, Certified QuickBooks ProAdvisor, and Certified Business Valuation Analyst. Bill began his career in public accounting in 1979. Since then he has worked at various public accounting firms throughout Connecticut. Bill received a Master of Science in Professional Accounting degree from the University of Hartford, after attending the University of Connecticut and Central Connecticut State University for his Bachelor of Arts and Master of Arts degrees. He subsequently attended Purdue University for doctoral studies in Accounting and Quantitative Methods in Business. Bill has instructed graduate and undergraduate courses in Accounting, Auditing, and other subjects at the University of Hartford, Central Connecticut State University, Hartford State Technical College, and Purdue University. He also taught GMAT and CPA Exam Review Classes at the Stanley H. Kaplan Educational Center and at Person-Wolinsky, and is certified to teach trade-related subjects at Connecticut Vocational Technical Schools. His articles on tax and accounting have been published in several professional journals throughout the country as well as on several accounting websites. William was born and raised in New Britain, Connecticut, and served on the City's Board of Finance and Taxation as well as its City Plan Commission. In addition to the blog, Accounting and Taxes Simplified, Bill writes a blog, "The Barefoot Accountant", for the Accounting Web, a Sift Media publication.
View all posts by William Brighenti →
This entry was posted in Accountants CPA Hartford, Articles and tagged $75000 per plate, 84% of fundraising millions comes from rich donors, Cenk Uygur, Current TV, David Koch, fundraising, fundraising contest, Fundraising the stakes, Hamptons, July 9 2012, legalized bribery, Mitt romney, Mitt Romney raised $106 million in June 2012, Obama raised $71 million in June 2012, occupy wall street, President Obama, rich are buying our democracy, rich donors, Ron Perlman, The Young Turks, transcript, video. Bookmark the permalink.