Posted on May 25, 2012 by William Brighenti
Get the Flash Player to see this content. 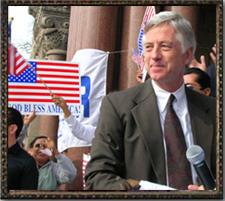 Rocky Anderson will be appearing on The Barefoot Accountant’s Internet Livestream Program on Taxes, Accounting, and U.S. Politics on Tuesday, May 29th, at 4:00 PM Eastern Time.

Rocky Anderson is the Presidential candidate for the newly formed Justice Party.  Formerly the Mayor of Salt Lake City for two consecutive terms from 2000 to 2008, Rocky recently left the Democratic Party because of his disenchantment with its ties to Corporate America.

In Rocky’s own words,

The Constitution has been eviscerated while Democrats have stood by with nary a whimper. It is a gutless, unprincipled party, bought and paid for by the same interests that buy and pay for the Republican Party.

During the interview, chat and phone lines are available to take your questions and comments.

The Barefoot Accountant’s questions will focus on the ever-increasing wealth and income disparity between the privilege and the average American.  Since the early 1970s, the ratio of CEO compensation to that of the average worker increased from 28:1 to as much as 325:1!  Conservative Democrats, like Bill Clinton, Barack Obama, and many Democrats in Congress are as guilty as Republicans in creating the great transfer of wealth from the average American to the elite in our country, resulting in the destruction of the middle class spawned from the New Deal of FDR.

Please do not miss this very important interview.  As Rocky argues, if Egypt can overthrow a dictatorship through a grass roots movement through political activism, so can we.  Tune in and find out how!

William Brighenti is a Certified Public Accountant, Certified QuickBooks ProAdvisor, and Certified Business Valuation Analyst. Bill began his career in public accounting in 1979. Since then he has worked at various public accounting firms throughout Connecticut. Bill received a Master of Science in Professional Accounting degree from the University of Hartford, after attending the University of Connecticut and Central Connecticut State University for his Bachelor of Arts and Master of Arts degrees. He subsequently attended Purdue University for doctoral studies in Accounting and Quantitative Methods in Business. Bill has instructed graduate and undergraduate courses in Accounting, Auditing, and other subjects at the University of Hartford, Central Connecticut State University, Hartford State Technical College, and Purdue University. He also taught GMAT and CPA Exam Review Classes at the Stanley H. Kaplan Educational Center and at Person-Wolinsky, and is certified to teach trade-related subjects at Connecticut Vocational Technical Schools. His articles on tax and accounting have been published in several professional journals throughout the country as well as on several accounting websites. William was born and raised in New Britain, Connecticut, and served on the City's Board of Finance and Taxation as well as its City Plan Commission. In addition to the blog, Accounting and Taxes Simplified, Bill writes a blog, "The Barefoot Accountant", for the Accounting Web, a Sift Media publication.
View all posts by William Brighenti →
This entry was posted in Accountants CPA Hartford, Articles and tagged American politics, Barefoot Accountant livestream internet program, Cenk Uygur, Current TV December 22 2011 interview, Democratic Party, grass roots movement, gutless unprinciple party, Justice Party, May 29 2012 4:00 PM ET, Mayor of Salt Lake City Utah, political activism, President of the United States, Presidential campaign 2012, Rocky Anderson, Rocky Anderson to be interviewed on the Barefoot Accountant’s livestream internet program, the ratio of CEO compensation to that of the average worker, The Young Turks, transfer of wealth from middle class, U.S. politics, video, wealth and income disparity between the privilege and the average American. Bookmark the permalink.