Are conservatives this week admitting that the country is fundamentally progressive? The Mega Power Panel on Cenk Uygur’s the Young Turks, January 13, 2012, Current TV. Video and transcript.

Posted on January 14, 2012 by William Brighenti
Get the Flash Player to see this content.

Cenk Uygur: Do you know what we are doing tonight? The Mega Power Panel. Michael Shure is here: the Epic Politics Man; the host of 2012 on the TYT Network. Ben Mankiewicz, also with the Young Turks, and also with Turner Classic Movies. Jimmy Dore, the comedian, the host of the Jimmy Dore Show. Sam Seder from New York, the host of the irreverent Majority Report, which I rather enjoy. I think I will call this the People’s Panel.

First topic for the panel: are conservatives this week admitting that the country is fundamentally progressive? My thesis for that is that you have Newt Gingrich, Rick Perry, and John Huntsman all talking about breaking up the big banks, Bain Capital, and other terrible things. In fact, other conservatives, like Nikki Haley, are saying, these guys are admitting that progressives are right basically.

Cenk Uygur: She’s not alone. And then Rush Limbaugh said this on his program about the line of attack against Mitt Romney: 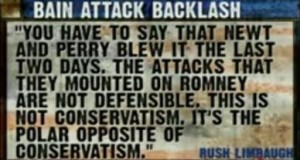 “You have to say that Newt and Perry blew it the last two days. The attacks that they mounted on Romney are not defensible. This is not conservatism. It’s the polar opposite of conservatism.”

So Michael let me start with you. Isn’t that an interesting admission that some of the leading candidates on the Republican side say conservatism doesn’t appeal to voters. I’m going progressive.

Michael Shure: In a way it kind of justifies everything that we have been saying about Republicans for so long that they just march in lock step with one another. And then you see somebody veer off and go against that and this is what happens. It’s almost like they are against the dogma of Republican politics right now.

It turns out that what’s happening is your hearing some of the conservatives say, what this guy did in Massachusetts when he was working for Bain when he was on Wall Street is indefensible even from our party. So I think that this may be the dawn of the splintering of that party.

Cenk Uygur: Sam, on Thursday here, we talked about how 55% of Republicans either strongly or very strongly feel that there’s income inequality and that there’s a problem among the classes, that there’s a conflict there. So is the reason that Gingrich and Perry and all these guys are going in that direction because even the Republican voters are progressive?

Sam Seder: I don’t know if the Republican voters are progressive but that PEW survey that you cited that number across the board has gone up by 20% in just the past two years. And I think that what that shows is that the message that Occupy Wall Street has been articulating is spreading across the country.

It’s a fracture along the lines in the Republican party between sort of business interests and the financier interests. I welcome it. I don’t know if it will resonate with South Carolina voters but I think that it is something that’s good for the country as a whole because it is amplifying the message that we are getting from Occupy Wall Street and it is amplifying the message that progressives have been saying for years now.

Cenk Uygur: Gingrich is saying, I gotta get votes, so he says, Goddamn rich, they’re screwing us.

Ben Mankiewicz: I don’t think this is a sign of anything. I don’t think it’s a significant fracture in the party. I think it goes to what Sam said, Newt Gingrich hates Mitt Romney, and everybody else hates Newt Gingrich. And that’s essentially what it is.

That Gingrich is incredibly isolated, he is an angry man, he doesn’t listen to anybody, he is prideful, and he thinks that this is the best thing for him and that’s it. And now we are seeing people who you never thought would speak publicly against Newt Gingrich so offended by what Gingrich has done that people like Rush Limbaugh and Nikki Haley are coming out and condemning essentially Gingrich. John Huntsman, who no one is paying attention to, and Rick Perry are just along for the ride.

Michael Shure: I think that one thing that Sam said we can’t gloss over. I think Ben’s right in large part, because this is about the sort of animus between the two to a degree but this is occupy: this is what the people in the Occupy Movement wanted. It’s part of the national debate right now even so much that the Republicans are talking about it.

Cenk Uygur: I think Jimmy is 100% right. They’re panicking: they’re saying, what the hell is the matter with you? Our job is to protect the rich. If you are going to attack the rich, you are basically giving up the game here.

Ben Mankiewicz: I think that the guys who spoke out against this, Rudy Giuliani who spoke out against it and condemned Gingrich, and Nikki Haley, and Rush Limbaugh, and everybody at Fox, Sean Hannity, were so angry at Rick Perry, that eventually that that argument is going to come back and carry the day. Maybe I’m wrong, but if we are still talking about this in a month as we get closer to Super Tuesday, I’d be really surprised.

Sam Seder: The point is that this story is more important six, nine, and fifteen months from now than it will be in the next month. At the end of the day, you are right: Gingrich is going to go away, maybe he will hurt Romney in South Carolina, that remains to be seen, but this is going to be a big toe hold once the nominee is actually established in the Republican party because this puts pressure on Obama: you cannot be outflanked on the left by Newt Gingrich. It’s going to really hurt him unless he adopts some of this rhetoric because this is going to have more importance down the road than I think it even does now.

Cenk Uygur: Sam, I am glad you brought up Obama because I am going to go back to my central thesis: before the elections, give me the money, what do you need me to do; banker X, I will do this; banker Y, I will do that. But when the elections come around, all of a sudden everybody is a lying progressive. President Obama is talking about the 99%, but he still does Jacob Lew as Chief of Staff so he is not really acting on that, he is just talking the talk.

Huntsman is talking about how he is going to break up the big banks. That’s way left of Obama. If you told Obama let’s break up the big banks, he’d say, oh my God, please don’t do it: Tim Geithner told me not to do it. Ron Paul is way to the left of them on so many other issues. It turns out when you got to go get votes, you realize….

PEW Research just did a recent poll: what political title has the most positive ramifications? Conservative comes in number two. Number one in the country, 67% say progressive. It’s a fundamentally progressive country and these politicians know it.

Cenk Uygur: That’s exactly right. When we come back, what makes the GOP tick because there is one clip that I really need you to see because it is an excellent indication of how the Republican party works.

William Brighenti is a Certified Public Accountant, Certified QuickBooks ProAdvisor, and Certified Business Valuation Analyst. Bill began his career in public accounting in 1979. Since then he has worked at various public accounting firms throughout Connecticut. Bill received a Master of Science in Professional Accounting degree from the University of Hartford, after attending the University of Connecticut and Central Connecticut State University for his Bachelor of Arts and Master of Arts degrees. He subsequently attended Purdue University for doctoral studies in Accounting and Quantitative Methods in Business. Bill has instructed graduate and undergraduate courses in Accounting, Auditing, and other subjects at the University of Hartford, Central Connecticut State University, Hartford State Technical College, and Purdue University. He also taught GMAT and CPA Exam Review Classes at the Stanley H. Kaplan Educational Center and at Person-Wolinsky, and is certified to teach trade-related subjects at Connecticut Vocational Technical Schools. His articles on tax and accounting have been published in several professional journals throughout the country as well as on several accounting websites. William was born and raised in New Britain, Connecticut, and served on the City's Board of Finance and Taxation as well as its City Plan Commission. In addition to the blog, Accounting and Taxes Simplified, Bill writes a blog, "The Barefoot Accountant", for the Accounting Web, a Sift Media publication.
View all posts by William Brighenti →
This entry was posted in Accountants CPA Hartford, Articles and tagged accountant for president, are conservatives this week admitting that the country is fundamentally progressive, Bain Capital, Big banks, conservatives, crony capitalism, Current TV, Fox News, GOP, January 13 2012, John Huntsman, John McCain, John Sununu, Mike Huckabee, Mitt romney, Newt Gingrich, Peter King, Republican party, Republican Party split, Rick Perry, Rick Santorum, ron paul, Rudy Giuliani, Rush Limbaugh, Sarah Palin, Saul Alinsky, Sean Hannity, South Carolina Governor Nikki Haley, South Carolina Republican primary, Tim Geithner, transcript, video, vulture capitalism, when Mitt Romney came to town. Bookmark the permalink.

One Response to Are conservatives this week admitting that the country is fundamentally progressive? The Mega Power Panel on Cenk Uygur’s the Young Turks, January 13, 2012, Current TV. Video and transcript.