Posted on October 22, 2011 by William Brighenti 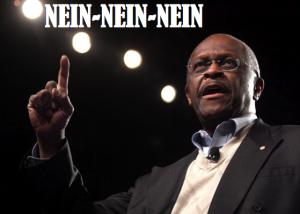 I cannot figure out what Herman Cain is…can you? Is he animal, mineral, or vegetable? I get the feeling at times that this pizza guy ate one pepperoni too much. Or that he is just too full of sausage or mozzarella. Or do I smell anchovies?

His nein-nein-nein final solution (aka, 9-9-9) to our country’s fiscal problems would plunge our country into a depression from which we would never recover. Imagine only taxing the rich 9% of their incomes; 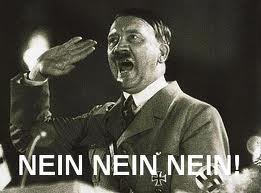 they presently pay around 15%.  Think of the dramatic increase in poverty resulting from imposing 9% taxes on the incomes of the poor as well as on every purchase made by the poor, including those for basic everyday living expenses.  Instead of the poor receiving a much needed, helping hand in the form of tax credits, they would be shot with a double-barrel shotgun blast of two taxes!  Talk about class warfare, my dear Paul Ryan:  that’s a very confused–or should we say mercenary–Robin Hood stealing from the poor to give to the rich.

This guy actually graduated with a degree in mathematics?!?!  It must be some sort of new math because I cannot figure out his 9-9-9 answer to our country’s never-ending recession (which in reality is a depression, but the politicians and banksters are too afraid to tell us so).  Can you follow his math?!  Perhaps he forgot to carry a 1 somewhere?

But Cain is not pure evil in his Garden of Pizzas:  he would not kill the super big and enormously profitable corporations with a triple tax.  Unlike his biblical predecessor, he would lovingly spare the corporations from a fate that Republicans regard worse than death:  i.e., an income tax.  God bless this servant of the Lord.

And I love his take on those suffering Americans without a job: “Don’t blame Wall Street, don’t blame the big banks, if you don’t have a job and you’re not rich, blame yourself!” Doesn’t that remark remind you of Marie Antoinette’s insensitive dismissal of the millions of starving peasants of France with her memorable, Caineseyan economic plan:  “let them eat cake”? To venture this remark clearly shows that this pizza guy has three of what I only have two of; but little upstairs, if anything.

I ask you, Professor Cornel West of Princeton University, is Herman Cain trying to outwit Barack Obama as the new “Black Mascot of Wall Street”? Or is he just trying to sell more books, sell more pizzas, book more honorariums, and…gosh, could it be, just make lots and lots of money with his cheesy sloganisms?  Recall that Herman Cain is a motivational speaker:  yeah, Herman, you already told us a million times how anyone can become a billionaire making, selling, and delivering pizzas.  Yeah, we know, just look at all those Greeks rolling in dough down at the corner pizza restaurant.

Nevertheless, Herman Cain is leading other Republican candidates in recent polls.  Americans sure love their pizzas, especially when they are topped with cheesy slogans.  Well, thought out, economic plans are too hard to digest for the American gastroeconomateur, but sugar-coated, bite-size candynomics are so much easier to swallow.  And your dittoheads love them!  Ask Rush.  He’ll tell you.

No complex mathematical algorithms or detailed campaign strategy for Herman Cain.  Just simple slogans for the simple minded, who are wolfing them down as if they were double-cheese pizzas.  This motivational speaker knows how to keep the kiddies coming back for more.

But let’s not give too much credit to Herman Cain for the success of the 9-9-9 slogan.  Remember how one politician was leading in the Republican polls four years earlier with a very similar campaign platform except for two (2) numerical digits?  And do you remember how many times Rudy Giuliani, while running for President, repeated the word 9-1-1 so that it eventually assumed the appearance of his entire campaign platform?  If you do, then you must be Albert Einstein reincarnated because I lost count after infinity raised to the nth power.  But to Giuliani’s credit, he was not as redundant as Herman:  at least he included another digit in his mystical refrain.

But that’s the power of mysticism, isn’t it?  Adolf Hitler and Joeseph Goebbels brainwashed the peoples of an entire country by repeating a big lie many, many times.  In fact, Goebbels further believed and said, “the bigger the lie, the more it will be believed.”  Then the lie was that the Jews caused the economic depression of Germany in the 1920s and early 1930s; now it’s our oppressive taxes on corporations and the rich causing our economic misery.  Herman and other Republicans exclaim, if only we eliminate taxes on both, they will benevolently create jobs here in America.  Sound familiar?  Isn’t this just Ronald Reagan’s Lauffer-curve, trickle-down nonsense rehashed for the present generation and the previous generations suffering from Alzheimers?

Imagine calling the White House in 2012 and hearing, “America’s Pizza…can I take your order?”  “Herman, I want a pepperoni pizza….and please, no anchovies this time.”

to me.  What’s your next cheesy slogan, Herman?  A pizza in every o 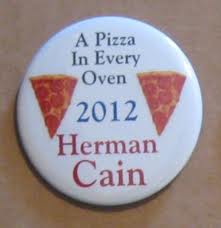 ven?  Oops, excuse me, but did he already say that?!

William Brighenti is a Certified Public Accountant, Certified QuickBooks ProAdvisor, and Certified Business Valuation Analyst. Bill began his career in public accounting in 1979. Since then he has worked at various public accounting firms throughout Connecticut. Bill received a Master of Science in Professional Accounting degree from the University of Hartford, after attending the University of Connecticut and Central Connecticut State University for his Bachelor of Arts and Master of Arts degrees. He subsequently attended Purdue University for doctoral studies in Accounting and Quantitative Methods in Business. Bill has instructed graduate and undergraduate courses in Accounting, Auditing, and other subjects at the University of Hartford, Central Connecticut State University, Hartford State Technical College, and Purdue University. He also taught GMAT and CPA Exam Review Classes at the Stanley H. Kaplan Educational Center and at Person-Wolinsky, and is certified to teach trade-related subjects at Connecticut Vocational Technical Schools. His articles on tax and accounting have been published in several professional journals throughout the country as well as on several accounting websites. William was born and raised in New Britain, Connecticut, and served on the City's Board of Finance and Taxation as well as its City Plan Commission. In addition to the blog, Accounting and Taxes Simplified, Bill writes a blog, "The Barefoot Accountant", for the Accounting Web, a Sift Media publication.
View all posts by William Brighenti →
This entry was posted in Accountants CPA Hartford, Articles and tagged 9-9-9, Herman Cain, Herman Cain Republican candidate President 2012, let them eat pizza, nein-nein-nein. Bookmark the permalink.