Connecticut Congressman Chris Murphy’s response to my question, what are you doing to create jobs?

Posted on September 19, 2011 by William Brighenti 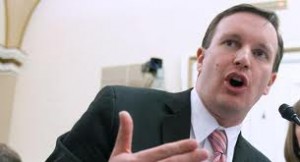 The Barefoot Accountant has repeatedly attempted for months to interview Chris Murphy, the United States Representative from Connecticut’s 5th District and a candidate in the Democratic primary for the United States Senate.  Unlike Susan Bysiewicz—former Secretary of State of Connecticut and also a Democratic candidate for the United States Senate—who readily made herself available for a one-hour video-taped interview, Chris Murphy has never agreed to an interview.  Consequently, out of frustration and disappointment, the Barefoot Accountant sent Chris Murphy an email asking the following question:  “what are you doing to create jobs?”

Herein is his reply to the Barefoot Accountant’s email, received on August 15th.  A video and transcript of Susan Bysiewicz’s response to virtually the same question can be found at The Barefoot Accountant interviews Connecticut’s Democratic candidate for the United States Senate, Susan Bysiewicz. Video and transcript of interview, Part I: How the government can create jobs.

I hear politicians talking all the time about “creating jobs”. But the people I meet throughout Connecticut rightly ask, “Great, but what are you doing about it?”

So I wanted to give you a quick update on what I’m doing in Washington and Connecticut to improve consumer confidence and spur immediate and long term job creation.

Last Friday, I hosted a press conference in Waterbury to call on Congress to pass a major investment in funding for roads, bridges and rail lines. The Republican leadership of the House of Representatives is proposing to slash funding for infrastructure projects which could cost us 6,000 jobs here in Connecticut. Senator Blumenthal joined me for the event, which was attended by over 100 workers engaged in the construction trades.

Last week I released the results of a survey of 151 Connecticut manufacturers conducted by my office. The news was good – half of all manufacturers reported plans to add jobs in the next year. This is the kind of good news our economy needs, and I held a press conference with Senator Blumenthal this week to announce the good news. And the data from the survey regarding the obstacles manufacturers face in creating these new jobs is already helping me develop new legislation to attack these problems. The survey proved what I have been saying for years – manufacturing is far from dead in this country—in fact, the industry in on the verge of a rebirth that will put Americans back to work, and I’m working hard to ensure that Connecticut leads the way.

In July, I successfully passed an amendment to the State Department funding bill that would apply the language of the Buy American Act to purchases made for items used by the State Department overseas. Currently, Buy American provisions only apply to the purchase of items that will be used within the United States, but in FY09 and FY10 alone, the Department of State spent over $1 billion on articles, materials and supplies manufactured outside the United States. Requiring our embassies to comply with the Buy American Act is a simple but effective way to create American jobs through smarter procurement policy.

And earlier this year, I introduced the American Jobs Matter Act, which would require all federal contracting officials to accept and solicit information from businesses regarding how many American jobs would be retained or created if their bid was chosen. We came close to passing this common sense legislation in the House, but it ultimately was rejected by the new majority (we lost by 4 votes!). The good news is that this bill has a new, strong champion in West Virginia Sen. Jay Rockefeller, who has introduced the American Jobs Matter Act in the Senate.

I will keep you informed as these efforts move forward, and let me know what additional ideas who think will help us get our state’s economy up and moving again.

The obvious question is:  why did Chris Murphy wait until this year to act on creating jobs when our country has been in a deep recession for years?  Similarly, why has President Barack Obama waited nearly three years to raise taxes on millionaires in order to reduce deficit spending instead of his previous willingness, over the past year, to consider cuts to social security, medicare, medicaid, and other social programs?  Could it just be merely election-year talk to get re-elected?  LOL!

William Brighenti is a Certified Public Accountant, Certified QuickBooks ProAdvisor, and Certified Business Valuation Analyst. Bill began his career in public accounting in 1979. Since then he has worked at various public accounting firms throughout Connecticut. Bill received a Master of Science in Professional Accounting degree from the University of Hartford, after attending the University of Connecticut and Central Connecticut State University for his Bachelor of Arts and Master of Arts degrees. He subsequently attended Purdue University for doctoral studies in Accounting and Quantitative Methods in Business. Bill has instructed graduate and undergraduate courses in Accounting, Auditing, and other subjects at the University of Hartford, Central Connecticut State University, Hartford State Technical College, and Purdue University. He also taught GMAT and CPA Exam Review Classes at the Stanley H. Kaplan Educational Center and at Person-Wolinsky, and is certified to teach trade-related subjects at Connecticut Vocational Technical Schools. His articles on tax and accounting have been published in several professional journals throughout the country as well as on several accounting websites. William was born and raised in New Britain, Connecticut, and served on the City's Board of Finance and Taxation as well as its City Plan Commission. In addition to the blog, Accounting and Taxes Simplified, Bill writes a blog, "The Barefoot Accountant", for the Accounting Web, a Sift Media publication.
View all posts by William Brighenti →
This entry was posted in Accountants CPA Hartford, Articles and tagged Barefoot Accountant questions Chris Murphy on job creation, Chris Murphy U.S. Representative from Connecticut, President Barack Obama proposing increased taxes on millionaires, What is Chris Murphy doing to create jobs. Bookmark the permalink.