Is the GOP trashing the economy? Cutting spending during a recession? Where is that jobs bill the Republicans were crying for before the last election? Cenk Uygur MSNBC TV June 2, 2011 Video and Transcript

Cenk Uygur: Okay, now next question: is the GOP trashing the economy? Now this is a fun question. The fact that high unemployment would help the GOP defeat president obama in 2012. And no American President since Franklin Delano Roosevelt has won a second term in office when the unemployment rate has been above 7.2%. So is the GOP purposely trying to hamper job growth by proposing Draconian spending cuts in an effort to take back the White House? Now, John, I know you are going to find that to be a controversial question but do you concede that if unemployment is high, that the Republican candidate in 2012 would certainly benefit?

And they’re not trying to win it for another candidate; they care about their own political futures. So I think they’re trying to cut spending because they honestly believe, and I agree with them, that by cutting spending, by getting the government spending under control, and the government under control, you will grow the economy. And I think that is their strategy: they have a different philosophy.

The idea that they’re trying to trash the economy to bring down President Obama is somewhat ridiculous.

Ryan Grim: Yeah, I think John’s right. I think that honestly, the House Republicans, especially the 80 plus who have come in in this last year, they honestly do believe that by cutting spending that somehow that’s going to lead to growth in the economy. There’s no reason to think that’s even remotely true. There’s just nothing to that.

Borrowing costs right now are at historic lows. So the idea that government spending is crowding out other investments would have to have some facts behind it to be believed. And one fact you look at are interest rates. Is it crowding out borrowing? And it is not. And they have nothing else to point to, and I’d be curious, John, how is it that if you cut spending and lay off Federal workers and state workers, that grows the economy. I am genuinely curious….

John Feehery: I think the Republicans are saying, you scale back and let the private sector flourish. You cut back on some of these silly regulations, let small businesses flourish….

Ryan Grim: Corporate profits are at record highs, though. How much more can the private sector flourish?

John Feehery: Most jobs come from small businesses. You got to get the government off their backs so that they can flourish.

Cenk Uygur: It’s funny how the big businesses wind up getting huge breaks what is supposed to help small businesses. They sitting on $1.6 trillion and they’re not doing a damn thing with it. Now, Jane, Ryan might be right about the 80 guys that just came in, they seem genuinely earnest, and you might disagree and I disagree with a lot of what they say, but I believe that they are earnest to some degree, right or wrong, right? But the old Republican hens they know that if you cut spending in the middle of tough economic times, you’re not going to create jobs, you’re going to cost jobs. Now to me, I think that they are eating that up. 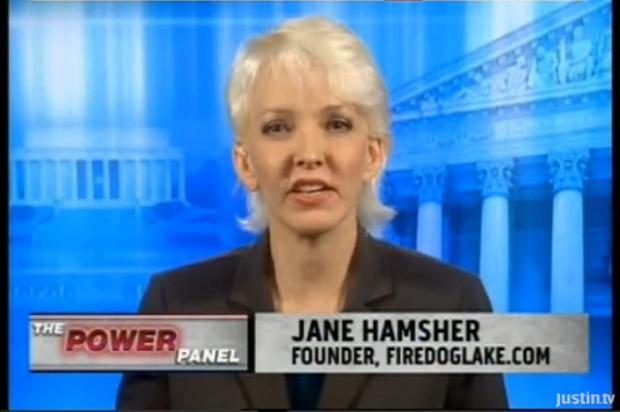 Jane Hamsher: But that seems to be the conventional wisdom across the political spectrum right now. Everybody’s an austerity freak. And you are absolutely right, Ryan is absolutely right, in that there is no jobs program out there. There’s nobody who has the courage to say right now, to be the adult in the conversation, and say we need to have a jobs program to put people back to work. And the last thing we should be doing is cutting state budgets and firing people. That it will only make the problem worse.

So it’s not just the 80 people who have just come in, it seems to be everybody. And they’re saying it whether they believe it or not because that’s where conventional wisdom is based these days.

Cenk Uygur: John, let me ask you a specific question about that. It goes towards what Jane and Ryan were saying. There’s been no jobs bills whatsoever. And the idea that if we just give more and more to corporations and hope that they create jobs, they already have all that $1.6 trillion just sitting there and they are not creating the jobs, how in the world would that work? Do you really believe that would create jobs? Do you think that the Republicans believe that that would create jobs?

John Feehery: What we need is a pro-growth agenda, there’s no doubt about that. We need to lower the corporate tax rate, we need to give small business a chance to flourish and thrive, and we really do need to get government off the back of small business so that we can create jobs. Government jobs are not going to grow us out of the economy. Only the private sector will do that. And we do need a pro-growth agenda.

Democrats talk about raising taxes. We shouldn’t raise taxes. That’s the silliest way to get the economy going. And we’re not going to raise taxes with Republicans in control.

John Feehery: There’s a couple of ways. First of all, the states are going bankrupt. And so is the Federal government. So you got to cut spending there. And the other thing, if you keep taxes low and cut taxes, you will get more capital into the private sector and it will grow jobs. And that’s what happened with Ronald Reagan. I think that it’s going to happen this time.

Cenk Uygur: I’m not sure that answered Ryan’s question but unfortunately we are out of time. And I got to tell you John, look, taxes are at a 60 year low, and we cut taxes to the bone under bush and it didn’t help our economy at all. It really, really hurt our economy.

You’re telling me to cut taxes more to stimulate the economy? We tried that for eight long years and it was a disaster, but I’m sorry, I’m getting the last word on that, panel. Sorry guys. But thank you for the conversation. As always, we loved it. Jane Hamsher, Ryan Grimm, John Feehery, see you guys next time.

William Brighenti is a Certified Public Accountant, Certified QuickBooks ProAdvisor, and Certified Business Valuation Analyst. Bill began his career in public accounting in 1979. Since then he has worked at various public accounting firms throughout Connecticut. Bill received a Master of Science in Professional Accounting degree from the University of Hartford, after attending the University of Connecticut and Central Connecticut State University for his Bachelor of Arts and Master of Arts degrees. He subsequently attended Purdue University for doctoral studies in Accounting and Quantitative Methods in Business. Bill has instructed graduate and undergraduate courses in Accounting, Auditing, and other subjects at the University of Hartford, Central Connecticut State University, Hartford State Technical College, and Purdue University. He also taught GMAT and CPA Exam Review Classes at the Stanley H. Kaplan Educational Center and at Person-Wolinsky, and is certified to teach trade-related subjects at Connecticut Vocational Technical Schools. His articles on tax and accounting have been published in several professional journals throughout the country as well as on several accounting websites. William was born and raised in New Britain, Connecticut, and served on the City's Board of Finance and Taxation as well as its City Plan Commission. In addition to the blog, Accounting and Taxes Simplified, Bill writes a blog, "The Barefoot Accountant", for the Accounting Web, a Sift Media publication.
View all posts by William Brighenti →
This entry was posted in Accountants CPA Hartford, Articles and tagged Cenk Uygur MSNBC TV June 2 2011 Video and Transcript, do tax cuts for big business and rich create jobs in US?, is the GOP trashing the economy?, Jane Hamsher of firedoglake.com, John Feehery Republican Strategist, Ryan Grimm of Huffington Post, Where are the jobs, where are the jobs bills?, why cut spending in a recession?. Bookmark the permalink.