Cenk Uygur:  Today we had another verbal taunt from Republicans accusing President Obama of failing to get serious about the budget.

John Boehner:  The fact is we haven’t seen enough progress from the White House.  If the White House wants to get this done, it’s time for them to step up to the plate and get serious about it.

Cenk Uygur:  I am so tired of them.  Their definition of getting serious is to refuse to raise taxes at all to fix the budget mess, even if it’s on millionaires.

Eric Cantor:  I ask the President hopefully that he will work with us to do so and to keep out of the discussions in surrounding the debt limit and in the Biden talks any notion that we are going to increase taxes.

Cenk Uygur:  Why is that off the table?  Why are we listening to these guys?  Well, it better be back on the table.  And now, of course, there are reports that Republicans rolled their eyes during a meeting with President Obama yesterday.  Now why did they do that?  Because he said that taxes were lower today than they were under Reagan.  So Republicans scoffed.

Look, I think they are children, and purely educated children at that.  If you are going to roll your eyes, you better know what the hell you’re talking about.  Now are you going to be surprised when I tell you that, of course, they were totally wrong.  Taxes are lower now than under Reagan. 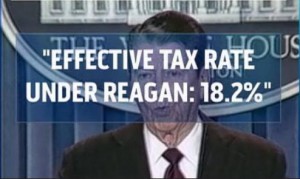 Now look at the effective tax rate.  That’s basically what Americans really pay in taxes after all the loopholes, exemptions and subsidies are taken into account.  According to the Congressional Budget Office, it was 18.2% during the Reagan years.  Compare that to the rate now while Obama is in 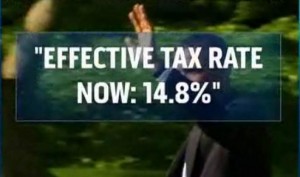 Taxes are, in fact, of course, way out of whack with historical norms in this country.  Under Eisenhower, top earners paid 91% in federal taxes.  Remember, that was a Republican President, and, in fact, the last 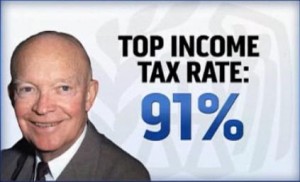 Republican President who balanced the budget.  For most of Reagan’s time in office, the rate for the top bracket was 50% or higher.  And the top income tax rate today, 35%.  So roll your eyes at that.  Hey, children, class is in session.  Pay attention, Republicans. You might learn something. 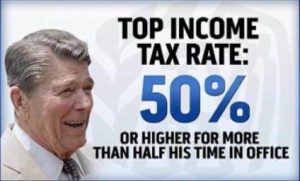 With me now is David Cay Johnson, columnist for taxnotes.com.  He is the author of the book, “Free Lunch:  How the Wealthiest Americans Enrich Themselves at Government Expense and Stick You with the Bill.”  All right, first, David, fundamental question. Republicans keep saying, oh, taxes are out of control, I can’t believe how high taxes are, we should never touch taxes. Are they even remotely accurate? 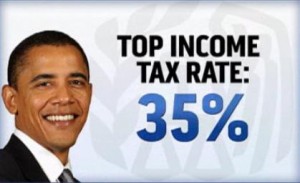 David Cay Johnson:  No, they’re talking as if they’re from another planet. If you look, Cenk, at the growth in income and ways people spend money, since 1984, the lowest year of taxes in Reagan’s administration, the way you’re talking about as a share of the economy, people’s debt has grown three and a half times faster than their income, their health care bills have gone up two-thirds faster than their income. But you know what’s down? What’s the lowest of all their expenditures is federal income taxes that only grew at 39% of the rate that their income did. 39% compared to 350% for debt and 165% for health insurance.

Cenk Uygur:  Right. And look, I’d love to pay low taxes. I’d love for everybody to pay low taxes. Who wants to pay more taxes? That isn’t the point. The point is do you have a budget problem or don’t you?  And if you’ve got a budget problem, you’ve got to look at how you are going to fix that. If you say I’m going to take the biggest factor off the table, then you’re not really serious about the budget. But the Republicans keep going to this point anyway.  I want to play you a clip from Eric Cantor again and I want to get your thoughts on it so let’s watch that.

Eric Cantor:  It’s counterintuitive to believe that you increase taxes on those individuals and entities you’re expecting to create jobs.

Cenk Uygur:  Is that really counterintuitive?

David Cay Johnson:  No, not in the least. You know, the Republicans problem fundamentally, Cenk, is that they are a one issue party that’s painted themselves into a corner. What can they say given all that they have done except lower taxes is the solution. This is sort of like bleeding the patient to death because you think something is wrong with their blood. Their only solution to anything is cut taxes. Well, it hasn’t worked and taxes are, as you pointed out, at a historic 60-year low and they have been growing at less than 40% of the rate of incomes since the low point of taxes in the Reagan administration. So this is just utter, complete nonsense.

Cenk Uygur:  And by the way, it’s not like the rich are paying so much more. No, as a percentage, the rich and corporations are paying a lot less and that tax burden is getting shifted onto the middle class. For example, the payroll tax as a percentage of the taxes we pay has gone up significantly. That’s what the middle class pays, right? But corporate taxes have gone down dramatically.

David Cay Johnson:  Absolutely. And Cenk, your earlier guest, the Republican strategist, actually made one important point that does need to be emphasized. The very biggest corporations in America pay way, way below the statutory 35% tax rate. The big 12 that were in the report yesterday have had negative tax rates in recent years. But if you run a real small business, you have assets of a million, five million, ten million, $100 million even, you pay just about the 35% tax rate. So if the Republicans want to address something, the issue should be either everybody should be paying the 35% rate or we should lower that rate by taking away all these favors that allow big corporations to game the system, to take what are really profits in America and convert them into expenses that push them into negative tax territory or almost no tax territory.

Cenk Uygur:  No, no, that’s a brilliant point.

Cenk Uygur:  Go ahead. Finish up the top 400 individuals because I want to come back to something you said.

David Cay Johnson:  Among the top 400 individuals who in 2008 made well over $200 million each, a third of them paid an effective tax rate of 15% or less. Some of them apparently paid zero. Half of them paid less than 15%. And their total overall tax rate was about 18%.  My goodness, that’s what a single wage earner pays when they make about $84,000. And these are people who are making hundreds of thousands of dollars a day.

Cenk Uygur:  Right. No, it’s unbelievable. And look, the great point that you made is that the big businesses are getting away and putting all the burden on the small businesses, so when the Republicans say we want to help small business, it’s nonsense. They keep putting all the burden on the small business to pay the 35% rate and then they let the big guys get away with paying, as you pointed out for some of the top 12 companies, a negative tax rate. That’s crazy where they get money back from us. It’s insane.

Cenk Uygur:  David Johnson, thank you so much for bringing us the facts. We really appreciate it. And we’ve got to go right now but thank you again.

William Brighenti is a Certified Public Accountant, Certified QuickBooks ProAdvisor, and Certified Business Valuation Analyst. Bill began his career in public accounting in 1979. Since then he has worked at various public accounting firms throughout Connecticut. Bill received a Master of Science in Professional Accounting degree from the University of Hartford, after attending the University of Connecticut and Central Connecticut State University for his Bachelor of Arts and Master of Arts degrees. He subsequently attended Purdue University for doctoral studies in Accounting and Quantitative Methods in Business. Bill has instructed graduate and undergraduate courses in Accounting, Auditing, and other subjects at the University of Hartford, Central Connecticut State University, Hartford State Technical College, and Purdue University. He also taught GMAT and CPA Exam Review Classes at the Stanley H. Kaplan Educational Center and at Person-Wolinsky, and is certified to teach trade-related subjects at Connecticut Vocational Technical Schools. His articles on tax and accounting have been published in several professional journals throughout the country as well as on several accounting websites. William was born and raised in New Britain, Connecticut, and served on the City's Board of Finance and Taxation as well as its City Plan Commission. In addition to the blog, Accounting and Taxes Simplified, Bill writes a blog, "The Barefoot Accountant", for the Accounting Web, a Sift Media publication.
View all posts by William Brighenti →
This entry was posted in Accountants CPA Hartford, Articles and tagged Author David Cay Johnston, Cenk Uygur MSNBC TV June 2 2011 Video and Transcript, GOP fighting to protect tax breaks for millionaires, GOP remains defiant on budget, GOP's tough stance: don't raise taxes on billionaires, war on the middle class. Bookmark the permalink.