Do we have a real social security problem? Or do we have a gang of thieves on the Deficit Commission!

So what’s the problem?  The problem is that the U.S. government has been borrowing social security monies to finance tax breaks for the rich, ridiculous estate tax giveaways for the upper .6% of the population, TARP bailouts of the Wall Street crooks, needless wars costing mega-billions of dollars and making defense contractors very wealthy, billions and billions of dollars of subsidies to oil companies (the richest companies in the world), etc.  And now these crooks in Washington want to default on their IOUs to the American participants in these retirement programs, as apparent in the declaration of former Wyoming Senator Alan Simpson (a former member of the gang of six) that our social security funds are merely “a bunch of IOUs” and not to be honored by the American government as a legitimate obligation!  (Why hasn’t that guy died and gone to hell yet?!)  They wouldn’t dare default on the IOUs to China because that would create a tsunami in the financial markets of the Wall Streeters; however, they figure you are too stupid to know and care. 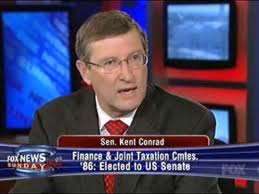 As you probably know by now, President Obama appointed members from Congress to address our federal deficit, and one of the items receiving its attention is the depletion of funds from the social security trust account.  To this commission, not surprisingly called the Deficit Commission, Obama appointed three Republican Senators–Senator Saxy Chambliss of Georgia (the only Republican considering tax increases), Republican Senator Mike Crapo (a very appropriate name for his utterances) of Idaho, and Senator Tom Coburn of Oklahoma (dubbed “Dr. No” for his fiscal hawk posture)–and three Democratic Senators–Senator Dick Durbin of Illinois (who sounds more like a Republican than a Democrat), Senator Kent Conrad of North Dakota, and Senator Mark Warner of Virginia.  Former Senator Alan Simpson of Wyoming recently served on this gang of crooks; apparently, he is no longer one of the six.  Every night when I say my prayers, I ask God, why haven’t you taken Alan from us?  Isn’t it his time yet?  Is there a reason why you leave him here to haunt us?

Senator Chambliss: the only decent Republican?

Given the characters on this commission and the remarks of Alan Simpson, Dick Durbin, Mark Warner, et al, do you think they will propose to uncap the social security tax limit on the wages of the rich? Not on your life.  This Simpson gang of six will think of a way to steal your social security benefits; and President Barack Obama, in his typical wussy, appeasing, centrist, and corporatist posture, will undoubtedly use the cover of this commission as a political shield and endorse their heist of your retirement monies, excusing it on the grounds, once again, that everyone has to share the pain.

Hey, President Neville Chamberlain, yes, let’s indeed share the pain. Tax the rich for a change! 72% of the American population are in favor of taxing the rich, including a majority of Republicans.

Oh, President Obama, you don’t want to tax the rich? Why? Oh, because they provide funds to your political campaigns? So, President Obama, why have you run as a Democrat advocating change? Doesn’t it sound like more of the same: screw the middle class and give even more tax breaks to the rich?!

Why doesn’t a progressive challenge Obama in a Democratic primary? Middle class Americans need a voice for change, and not more of the same. 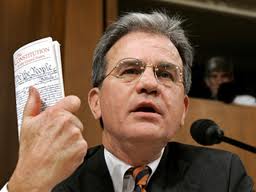 And by the way, Alan Simpson, you old folksy cowboy from Wyoming, Westerners used to hang thieves for stealing horses and cattle, remember?  Are you not scheming to steal monies that we contributed all of our working lives and are entitled to receive when we are too old and too sick to work any longer?  That’s why social security and medicare are called entitlements:  we are entitled to them; we paid for them!  So you’re all just a bunch of rustlers, planning to take our retirement and health insurance funds!

Hey, anybody for a necktie party?

William Brighenti is a Certified Public Accountant, Certified QuickBooks ProAdvisor, and Certified Business Valuation Analyst. Bill began his career in public accounting in 1979. Since then he has worked at various public accounting firms throughout Connecticut. Bill received a Master of Science in Professional Accounting degree from the University of Hartford, after attending the University of Connecticut and Central Connecticut State University for his Bachelor of Arts and Master of Arts degrees. He subsequently attended Purdue University for doctoral studies in Accounting and Quantitative Methods in Business. Bill has instructed graduate and undergraduate courses in Accounting, Auditing, and other subjects at the University of Hartford, Central Connecticut State University, Hartford State Technical College, and Purdue University. He also taught GMAT and CPA Exam Review Classes at the Stanley H. Kaplan Educational Center and at Person-Wolinsky, and is certified to teach trade-related subjects at Connecticut Vocational Technical Schools. His articles on tax and accounting have been published in several professional journals throughout the country as well as on several accounting websites. William was born and raised in New Britain, Connecticut, and served on the City's Board of Finance and Taxation as well as its City Plan Commission. In addition to the blog, Accounting and Taxes Simplified, Bill writes a blog, "The Barefoot Accountant", for the Accounting Web, a Sift Media publication.
View all posts by William Brighenti →
This entry was posted in Accountants CPA Hartford, Articles and tagged gang of six, senator alan simpson of wyoming, senator dick durbin of illinois, senator kent conrad of north dakota, senator mark warner of virginia, senator mike crapo of idaho, senator tom coburn of oklahoma. Bookmark the permalink.

2 Responses to Do we have a real social security problem? Or do we have a gang of thieves on the Deficit Commission!