Robbing the middle class. Congress and Obama want to steal your retirement funds!

How can social security have a $2.5 trillion surplus and yet everybody just says that it’s a bunch of IOUs?

But this is what Congress and President Obama fail to tell you. Congress and the Presidents took all of this money out of our retirement fund and spent it on other items in the budget, like needless wars, tax cuts for the rich, oil subsidies to ExxonMobil, Chevron, and others, etc. But the government still owes you that money, as it owes China for all of the money the government borrowed from them.

Now the government would never suggest that we should not pay back China or anyone else that we borrowed money from because that would put in question the full faith and credit of the United States. The financial markets would flip out over that. So they never refer to that money as just a bunch of IOUs.

But when it comes to the money that the government borrowed from YOUR social security surplus that you paid into your whole life, they characterize that as just a bunch of IOUs.

Former Senator Alan Simpson on Obama’s Deficit Commission: “There is no surplus in there, it’s a bunch of IOUs. It’s two and a half trillion bucks of IOUs.”

Since they don’t want to pay you back what they owe you, politicians in Washington are saying that social security is in dire straits! But that’s is totally false! They just don’t want to pay back your social security surplus that they spent on other priorities, like tax breaks for the rich, oil subsidies to ExxonMobil, Chevron, et al, and all the needless wars making defense contractors wealthy. 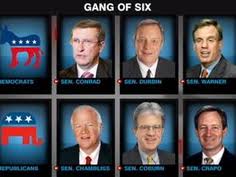 Deficit Commission: the Gang of Six

But it’s not just Republicans who want to rob you of your social security retirement funds. Here’s Democratic Senator Dick Durbin of Illinois: “In 2037 social security falls off the cliff. There’s a 22% reduction in the payment of benefits, which is not something we cannot tolerate.”

How is that falling off a cliff? But that is Dick Durbin, a so-called liberal Democrat, playing the same exact rhetorical tricks as the Republicans! He’s part of the gang of six senators who are coming up with a proposal for deficit reduction, somewhere between Congressman Ryan’s plan and President Obama’s plan, which means that it’s already on massively conservative ground. And as part of that plan they will “reform” social security.

Now if reform means they raise the cap on who pays the payroll tax and of the upper income brackets have to continue paying the social security at higher levels of income, that makes sense because everybody chips in.

But if they raise the retirement age, that means they are coming to rob you.

They don’t want to pay you your full benefits: they will make you work longer, and not pay you the benefits that you would have gotten if you retired at the present retirement age. If they do this, you should be in open revolt!

Don’t let the Republicans and the Democrats do that to you. Don’t let anybody pull the wool over your eyes on that. The social security surplus is real, it’s money that you paid into a trust fund for your retirement, it’s money that you are owed. And under no circumstances should you let these Washington politicians take that from you.

William Brighenti is a Certified Public Accountant, Certified QuickBooks ProAdvisor, and Certified Business Valuation Analyst. Bill began his career in public accounting in 1979. Since then he has worked at various public accounting firms throughout Connecticut. Bill received a Master of Science in Professional Accounting degree from the University of Hartford, after attending the University of Connecticut and Central Connecticut State University for his Bachelor of Arts and Master of Arts degrees. He subsequently attended Purdue University for doctoral studies in Accounting and Quantitative Methods in Business. Bill has instructed graduate and undergraduate courses in Accounting, Auditing, and other subjects at the University of Hartford, Central Connecticut State University, Hartford State Technical College, and Purdue University. He also taught GMAT and CPA Exam Review Classes at the Stanley H. Kaplan Educational Center and at Person-Wolinsky, and is certified to teach trade-related subjects at Connecticut Vocational Technical Schools. His articles on tax and accounting have been published in several professional journals throughout the country as well as on several accounting websites. William was born and raised in New Britain, Connecticut, and served on the City's Board of Finance and Taxation as well as its City Plan Commission. In addition to the blog, Accounting and Taxes Simplified, Bill writes a blog, "The Barefoot Accountant", for the Accounting Web, a Sift Media publication.
View all posts by William Brighenti →
This entry was posted in Accountants CPA Hartford, Articles and tagged Democratic Senator Conrad wants to steal your social security, Democratic Senator Dick Durbin wants to steal your social security, Democratic Senator Warner wants to steal your social security, gang of six, Obama and Congress want to steal your retirement funds, Obama is in bed with the Republicans and the rich, Obama selected a gang of thugs to steal your retirement funds, Robbing the middle class. Bookmark the permalink.

6 Responses to Robbing the middle class. Congress and Obama want to steal your retirement funds!