Is Governor Scott Walker the Devil?

Posted on February 25, 2011 by William Brighenti 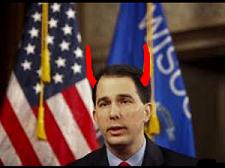 Six years ago when I served on the Board of Finance and Taxation of the City of New Britain (population 70,000) in Connecticut, our municipal budget was $190 million. Of that total amount, as much as $130 million went to the Board of Education. The Superintendent of Schools was paid an annual salary of $155,000; her several Assistant Superintendents, $130,000; a bunch of Principals, $120,000; their Assistant Principals, $100,000. The median salary of teachers was $80,000 for a 183-day work year. Moreover, municipal employees received family health insurance benefits costing nearly $20,000 per year.

Similarly, a number of firemen and police officers earned $80,000 per year, since their union agreement required the funding for unfilled positions, resulting in considerable overtime pay. After twenty or twenty-five years of service, they were entitled to retire at 70% of their last three years’ average salary, conveniently padded with unnecessary overtime.

When collective bargaining in Wisconsin prevented the governmental employees of Wisconsin from agreeing to contribute 12% to their healthcare and retirement benefits, I did not feel particularly sympathetic toward the disgruntled governmental employees. Most of us who are fortunate enough to be employed in the private sector have been contributing 20% to 50% to our healthcare insurance, while picking up the entire cost of insurance on our family members. Many of us do not even have health insurance or retirement benefits offered by our employers. Furthermore, our pension plans are not defined benefit plans but paltry contribution plans, often a 3% simple IRA.

Franklin Delano Roosevelt, a pro labor President, had spoken out against collective bargaining for governmental employees:

All Government employees should realize that the process of collective bargaining, as usually understood, cannot be transplanted into the public service…Particularly, I want to emphasize my conviction that militant tactics have no place in the functions of any organization of Government employees. Upon employees in the Federal service rests the obligation to serve the whole people, whose interests and welfare require orderliness and continuity in the conduct of Government activities. This obligation is paramount. Since their own services have to do with the functioning of the Government, a strike of public employees manifests nothing less than an intent on their part to prevent or obstruct the operations of Government until their demands are satisfied. Such action, looking toward the paralysis of Government by those who have sworn to support it, is unthinkable and intolerable.

Governor Walker has to resolve a budget deficit of $3.6 billion. His choice is simple: pass it all onto the private citizens in the form of taxes; or ask governmental employees to contribute 12% to their benefit plans and share the pain. The unions initially refused to contribute 12%, saying it violated their collective bargaining agreement.  In recent days little has changed since then.

In the coming months and years, with all of the municipalities and states suffering severe deficits, you, too, may see a similar battle occurring in your state. Will you join with the ranks of governmental employees, supporting their annual salary increments and their reluctance to share in the costs of healthcare and retirement benefits? Or will you be looking at the increase in your tax bills and complaining about their annual increments?

William Brighenti is a Certified Public Accountant, Certified QuickBooks ProAdvisor, and Certified Business Valuation Analyst. Bill began his career in public accounting in 1979. Since then he has worked at various public accounting firms throughout Connecticut. Bill received a Master of Science in Professional Accounting degree from the University of Hartford, after attending the University of Connecticut and Central Connecticut State University for his Bachelor of Arts and Master of Arts degrees. He subsequently attended Purdue University for doctoral studies in Accounting and Quantitative Methods in Business. Bill has instructed graduate and undergraduate courses in Accounting, Auditing, and other subjects at the University of Hartford, Central Connecticut State University, Hartford State Technical College, and Purdue University. He also taught GMAT and CPA Exam Review Classes at the Stanley H. Kaplan Educational Center and at Person-Wolinsky, and is certified to teach trade-related subjects at Connecticut Vocational Technical Schools. His articles on tax and accounting have been published in several professional journals throughout the country as well as on several accounting websites. William was born and raised in New Britain, Connecticut, and served on the City's Board of Finance and Taxation as well as its City Plan Commission. In addition to the blog, Accounting and Taxes Simplified, Bill writes a blog, "The Barefoot Accountant", for the Accounting Web, a Sift Media publication.
View all posts by William Brighenti →
This entry was posted in Accountants CPA Hartford, Articles and tagged Barefoot Accountant on the budget battle in Wisconsin, collective bargaining of governmental employees, demonizing Governor Scott Walker, is Governor Scott Walker really the devil?, is Governor Scott Walker the Devil, Wisconsin budget battle. Bookmark the permalink.

One Response to Is Governor Scott Walker the Devil?