Billionaires meet secretly with politicians, talk-show hosts, and others to influence legislation for personal business interests

Posted on January 31, 2011 by William Brighenti

Usually rumors of smoke-filled rooms where secret conspiracies are hatched are ridiculous. But it turns out there are some exceptions. Sometimes there is a room where the rich and powerful get together to secretly conspire about how to protect their wealth and power. And it turns out, we found that room. That appears to be exactly what is happening as we speak at this Palm Springs hotel where hundreds of political and media elites are gathering behind closed doors for a four day conference that ends tomorrow.

No word yet on whether they filled it with smoke but they definitely conspired and raised an estimated $30 million for the 2012 election. The invitation list is mostly kept secret but here is what we know.

The secretive billionaire brothers who organized the event are David and Charles Koch, each worth an estimated $21 billion. They own Koch Industries, an oil and chemical giant, that stands as the second largest privately owned company in the U.S. 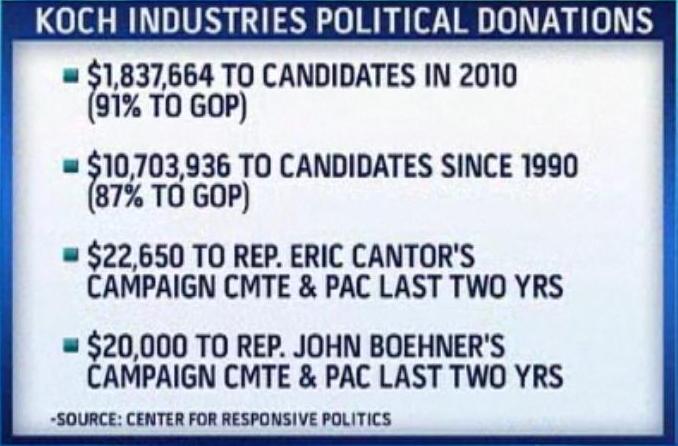 For years the Kochs have been promoting their own business interests by investing in right-wing groups. That includes $25 million between 2005 and 2008 to make you think that global warming is a myth and that we have too much environmental regulation. Interesting, considering Koch Industries happens to be one of the top ten air polluters in the U.S.

The Kochs have also poured millions into a group called, “Americans for Prosperity”, a group that helped organized many of the Tea Party’s first rallies, while denying, of course, any connection to the Tea Party at all, and claiming to be “grass roots”.

Now all of this is triggering a backlash. This weekend hundreds of protesters gathered outside of the hotel, trying to raise public awareness about the cloak-and-dagger activities of the secretive Koch brothers. Twenty-five protesters were arrested.

With me now is Michael Isikoff, NBC News National Investigative Correspondent. First let me ask you, it’s not as if these guys are not allowed to do this. Of course, they are allowed to get together and make any plans they like to elect Republicans. But it seems noteworthy to point out where their financial interests lie and why they might be interested in the political environment in the country.

Michael Isikoff: Exactly. And this has taken on more prominence and significance in the post United Citizens era, where unlimited corporate contributions can be poured into political nonprofit groups, which the Kochs have been doing for years, and then can be spent in the political process to influence elections, to run attack ads, to do electioneering communications that are indistinguishable from regular campaign ads. And we saw that in the last election where a whole array of nonprofit groups popped up and spent over $200 million on behalf of candidates in the last election. That opened the door for more of it coming. And this conference that is held by the very secretive Koch brothers, who do not like to disclose anything that they do not have to, is a sign of that. And as you pointed out, a principal goal of this conference is to raise money for grass-roots efforts in the 2012 election. 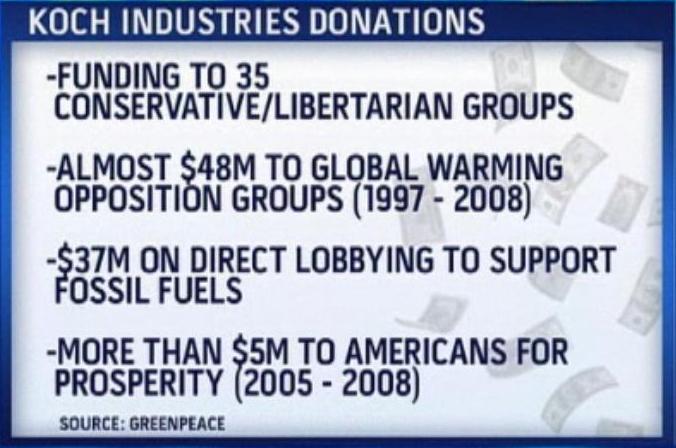 Cenk Uygur: Here’s where some of the funding goes that the Koch brothers give out. First, they have funding to thirty-five conservative and libertarian groups. And almost $48 million to global warming opposition groups. $37 million on direct lobbying to support fossil fuels. And more than $5 million to American for Prosperity. As they spend all of this money, they are looking for a return on their investment, aren’t they, Michael? They have factories creating pollution: they are one of the top ten polluters. Then they spend a gigantic amount of money to make sure that there is no regulation on pollution.

Michael Isikoff: The groups they fund are certainly consistent with their own personal economic interests. They would tell you they are strong free market conservatives, libertarians; we believe in the capitalist system; we believe that things work best when regulations are least, and that benefits all. It’s their economic philosophy. You may not agree with it. But that’s where they would tell you where they’re coming from. It’s worth mentioning that the causes they fund do happen to benefit their own personal business interests. 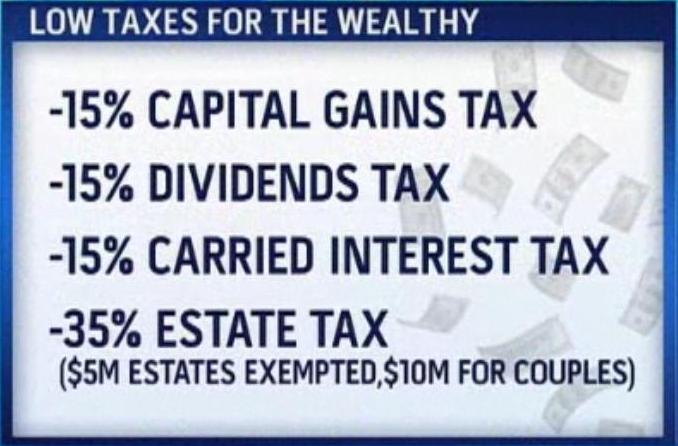 Cenk Uygur: Of course, 91% of their money goes to Republicans, and that is not surprising. Another thing that they’re interested in is taxes. Look at the capital gains tax: that’s 15%. When you look at the dividends tax rate, that’s 15%. Carried interest tax is 15%. That’s some of the lowest taxes in the country. They pay less taxes than we do. They are smart: you invest in politicians and you get a lot more money back in much lower rates than the rest of the country. It makes sense.

Michael Isikoff: That’s a valid argument you could make. But the Kochs and their defenders come back and say, what’s the issue here? Is it our economic and political philosophy? Fine, let’s have a debate on that. Or is it about the influence of money in politics. And they would say, “look at George Soros on the liberal side”. But the real issue here, as I was saying before, the post United Citizens era, that allows a lot of this money to pour into political groups without any disclosure and you get a secretive conference like this. Albeit from a distance, that’s exactly what we are witnessing.

William Brighenti is a Certified Public Accountant, Certified QuickBooks ProAdvisor, and Certified Business Valuation Analyst. Bill began his career in public accounting in 1979. Since then he has worked at various public accounting firms throughout Connecticut. Bill received a Master of Science in Professional Accounting degree from the University of Hartford, after attending the University of Connecticut and Central Connecticut State University for his Bachelor of Arts and Master of Arts degrees. He subsequently attended Purdue University for doctoral studies in Accounting and Quantitative Methods in Business. Bill has instructed graduate and undergraduate courses in Accounting, Auditing, and other subjects at the University of Hartford, Central Connecticut State University, Hartford State Technical College, and Purdue University. He also taught GMAT and CPA Exam Review Classes at the Stanley H. Kaplan Educational Center and at Person-Wolinsky, and is certified to teach trade-related subjects at Connecticut Vocational Technical Schools. His articles on tax and accounting have been published in several professional journals throughout the country as well as on several accounting websites. William was born and raised in New Britain, Connecticut, and served on the City's Board of Finance and Taxation as well as its City Plan Commission. In addition to the blog, Accounting and Taxes Simplified, Bill writes a blog, "The Barefoot Accountant", for the Accounting Web, a Sift Media publication.
View all posts by William Brighenti →
This entry was posted in Accountants CPA Hartford, Articles and tagged billionaires right-wingers secret conference, Cenk Uygur, Charles Koch, David Koch, Koch brothers, Koch Industries Inc, Michael Isikoff. Bookmark the permalink.