Is Obama Another Neville Chamberlain?

Posted on December 10, 2010 by William Brighenti 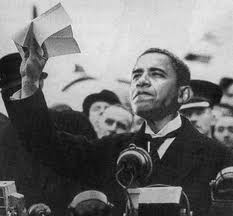 For those of you unfamiliar with the history of World War II, Neville Chamberlain was the prime minister of Great Britain just prior to the advent of World War II.  He is most remembered for his “Munich Agreement”, in which he deeded over Czechoslovakia to Nazi Germany with Germany’s promise that it would not pursue further aggression.  Of course, this was making a deal with the devil; Adolf Hitler was Satan incarnate, for certain.  Consequently, his name has become the emodiment of appeasement and naivete, if not utter stupidity and idiocy.  You cannot make a deal with the devil.  Shown here in the picture to the right is Neville Chamberlin upon his return from Munich in 1938 after meeting with Adolf Hitler with the scrap of paper that was to “ensure peace in our time”; the paper was signed by Hitler.

The question now is whether Barack Obama is another Neville Chamberlain.  Obama is supporting the tax cuts for the rich, claiming that unless we agree to these demands by the Republicans, our economy may dip back into recession, as Chamberlain asserted that unless England and Europe gave Nazi Germany Czechoslovakia, that a war with Germany might occur.  Whether you are for the tax cuts or against the tax cuts, the majority of Americans were surprised, if not flabbergasted, by Obama’s immediate capitulation to Republican demands for inclusion of the rich in the tax cuts, including a very generous exemption from estate taxes: under the plan, as much as $10 million may be exempt from any estate tax, with the estate tax rate on any excess being reduced from 55% to 35%!

Certainly, Barack Obama is no Winston Churchill.  Perhaps he restricts his fighting to the basketball court, where he recently incurred an injury requiring 18 stitches, because he certainly did not fight the good fight before conceding to the Republican demands, merely accepting in return a 13 month extension of unemployment benefits for 2 million Americans, a reduction in payroll taxes, and an extension of a grab bag of tax credits for college tuition and other items.  Like Chamberlain, who only received Hilter’s signature on a scrap of paper promising never to go to war again with England, Obama got very little in return for his big giveaways to the rich and privileged.

A recent CBS poll found 70% of Americans were not in favor of these tax cuts for the rich—resulting in huge deficits of $700 billion dollars—when our national debt is already $14 trillion.  Many feel that no tax cuts would have been preferable to this agreement, since no deal would spare us from an additional $980 billion of debt.

Obama is justifying these tax cuts through a fear tactic, trying to scare the bejeezus out of everyone:  unless we give the rich these tax cuts, our country may lapse back into another recession.  Dear President Obama, for your information, we are still in this recession in terms of unemployment:  my next job interview is in Peking, thanks to NAFTA.  And in 2012, we will still be in this recession in terms of unemployment.  Jobs have been going overseas for years now, and with the further consolidations of mega-size corporations, layoffs will continue.  Of course, we all know by now that the unemployment numbers may not reflect the worsening labor market since, after a certain period of time, the long-term unemployed are no longer included in the calculation of the current rate of unemployment.  That great mouthpiece of Republican ideology, former President Ronald Reagan, redefined unemployment to deliberately understate figures by excluding those “not actively searching for jobs.”

After hearing the endorsement of these tax cuts for the rich by Harvard’s Larry Summers, and his prediction of another recession if they are not enacted, I suspect that President Obama may still be listening to the counsel of his former Economic Advisor.  What do you expect from an educator of America’s elite class?  An endorsement of a government of the unprivileged, by the unprivileged, and for the unprivileged?  Is anyone surprised to hear Summers’ talking points uttered by Obama, knowing that Summers advised Obama on his economic policies in his first two years as President?  Does Paul Winchell and Knucklehead Smiff ring a bell?

To paraphrase one of the greatest Yankees of all time, Yogi Berra:  deja vu Neville Chamberlain all over again?

William Brighenti is a Certified Public Accountant, Certified QuickBooks ProAdvisor, and Certified Business Valuation Analyst. Bill began his career in public accounting in 1979. Since then he has worked at various public accounting firms throughout Connecticut. Bill received a Master of Science in Professional Accounting degree from the University of Hartford, after attending the University of Connecticut and Central Connecticut State University for his Bachelor of Arts and Master of Arts degrees. He subsequently attended Purdue University for doctoral studies in Accounting and Quantitative Methods in Business. Bill has instructed graduate and undergraduate courses in Accounting, Auditing, and other subjects at the University of Hartford, Central Connecticut State University, Hartford State Technical College, and Purdue University. He also taught GMAT and CPA Exam Review Classes at the Stanley H. Kaplan Educational Center and at Person-Wolinsky, and is certified to teach trade-related subjects at Connecticut Vocational Technical Schools. His articles on tax and accounting have been published in several professional journals throughout the country as well as on several accounting websites. William was born and raised in New Britain, Connecticut, and served on the City's Board of Finance and Taxation as well as its City Plan Commission. In addition to the blog, Accounting and Taxes Simplified, Bill writes a blog, "The Barefoot Accountant", for the Accounting Web, a Sift Media publication.
View all posts by William Brighenti →
This entry was posted in Accountants CPA Hartford, Articles and tagged extension of Bush tax cuts, Is Obama another Neville Chamberlain, rich tax cuts. Bookmark the permalink.